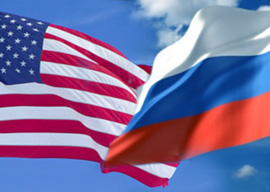 Mitt Romney has gone on record with the crackpot idea that the Russians are America’s “number one geopolitical foe.” To my knowledge, no noted Kremlinologists have bothered to weigh in on this topic, so it is left to me to untangle his curious word-pretzel. My credentials for this task consist of reading the news, dating a couple of devushkas, and taking a pleasant vacation in the Crimea in nearby Ukraine, where I was fortunate enough to speak with a few intelligent cabdrivers. This humble expertise apparently makes me better informed than Willard Mitt Romney on US-Russia relations.

The Russian Federation was founded on Christmas Day 1991. Early developments were encouraging. The Russians were willing to take American advice on reordering their decaying economic system. American economist grandees were dispatched, and their ideas were acted upon with what appeared to be artless credulity.

The result was that the Russian economy imploded. Russian men’s life expectancy suddenly fell by years, vast swaths of the economy were given away to sinister oligarchs, and the entire nation was thrown into chaotic gangsterism. What is worse, some of the American economists hired to help the Russians profited from all of this, and the gangster oligarchs were often supported by powerful American interests.

“Romney’s plan to further alienate the Russians serves no purpose other than pleasing the crackpots who run our senile military-industrial complex.”

I’m no diplomat and have no certificates in the political sciences. As such I am unsure of the correct protocol for accidental economic extermination of a friendly nation. The actual diplomatic response was along the lines of, “Ha ha, you trusted us.” Most Americans involved in that debacle were promoted. Larry Summers, who masterminded the operation, was eventually made Treasury Secretary and president of Harvard. While I do not think our government set out to deliberately vaporize Russia’s economy, I wouldn’t blame a Russian for suspecting so.

In 1999, the US and NATO engaged in a war against the Serbs, whom the Russians look on as “little brothers” due to their linguistic and religious ties. NATO, which appears to have invaded nonbelligerent nations on…more…than…one…occasion, has since expanded right up to Russian borders.

In spite of this American perfidy, the Russians gave the green light to the US and NATO to set up bases on their border after the 9/11 attacks. How did we repay the Russians for their trusting generosity? In 2002, Putin suggested Russia might be invited to join NATO. Numskull diplomats told him to wait in line with Latvia. Later in the year, the US withdrew from the ABM Treaty, ostensibly to build defenses against Iran…in the Czech Republic and Poland. The Russians offered the US one of their radar facilities in Azerbaijan, which is a lot closer to Iran than the Czech Republic is. The US said no, fueling Russian paranoia that this missile defense was aimed at weakening their remaining nuclear deterrent.

In 2004, something called the Orange Revolution happened in Ukraine. The American media framed it as a battle between Tatar despotism in the person of Viktor Yanukovych against the forces of democracy and disco music in the person of Victor Yuschenko. If you believe the Western media, the brave Ukrainians stood up and put disco-democracy in charge. The reality is, this was a fight between American and Russian intelligence agencies, each attempting to put their favored proxies in charge of Ukraine. The Ukrainian people eventually realized this and threw Yuschenko out of office as soon as they were able. He remains the most unpopular president in Ukrainian history. His wife is widely suspected of being an American spook. Who is in charge in Ukraine now? The alleged villain of the Orange Revolution, Viktor Yanukovych.