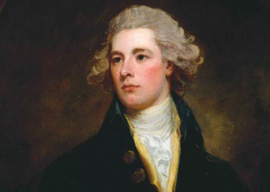 William Pitt the Younger, circa 1783 by George Romney

As summer ends, our haste in forgetting the abuse Mitt Romney spewed against conservatives during the GOP primaries is as unfortunate as it is convenient. Our feigned amnesia allows us to measure the Massachusetts moderate against Barack Obama’s subterranean standards, which could elevate even the lowest worm by comparison.

But this exaltation of mediocrity by mere contrast with human nature’s basest expressions is a built-in feature of the Manichaean political universe we have constructed. We see things through the deforming, dualistic lens of liberal versus conservative. Far worse, we erect this vision as our only truth. This vapid dualism is a diabolical ruse.

And so we face two problems. The first is the absence of standards against which to measure our presidential candidates. The second and graver problem is the gradual loss of definitions and principles, the intellectual means of measurement.

“George Romney (1734-1802), one of England’s defining portraitists and a direct ancestor of Mitt Romney’s, provided some of the finest images in the history of painting.”

It was not always so. For millennia, the high-minded political virtues Aristotle meticulously described in the Nichomachean Ethics“and which St. Thomas Aquinas would later refine to the altitude of a divine model”often inspired the simplest men to greatness. If a philosopher’s words could not move, then artists furnished images.

George Romney (1734-1802), one of England’s defining portraitists and a direct ancestor of Mitt Romney’s, provided some of the finest images in the history of painting.

Romney was able to immortalize ideals without idealizing. I discovered this one frigid spring day when all of London smelled of the sea. A pungent downpour nudged me into the galleries of Tate Britain. Romney’s work seized me from a distance with its splendor.

Romney’s portrait of William Pitt the Younger is a masterpiece. It is almost stark in its economy. Its purity, psychological depth, and unimpeachable fidelity to its subject remain fresh and engaging.

Pitt became prime minister at 24. He argued passionately against Britain’s wasteful war on the American colonies. As the engineer of the Acts of Union 1800, he attempted to procure Catholic emancipation, establishing himself as one of history’s finest champions of religious toleration.

Mitt would do well to study Pitt, who was renowned for his administrative efficiency and his intolerance for radicals. Only during the war with France did Pitt raise taxes. He was appalled by the false doctrines of the French Revolution that continue in modern big-government politics.