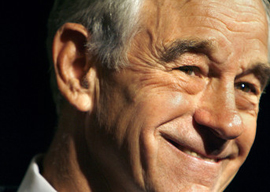 Sometimes intelligent people say things that are so dumb, I wonder whom they are trying to please. In George Will’s latest diatribe, “Ron Paul, spoiler?,” he makes nice to those groups that have advanced his career—GOP foundations, the media establishment, and DC insiders whom he presumably sees socially. Unlike other Republican commentators, Will recognizes that Ron Paul can be a critical factor in the presidential election, even if the congressman cannot hope to win the GOP nomination: “His candidacy [as a third-party candidate] might guarantee Barack Obama’s reelection.”

Will pooh-poohs the supposedly bloated figure that comes out of a recent NBC News/Wall Street Journal poll about Paul’s possible performance if he runs as an independent. He finds the predicted quotient, 18 percent, to be much too high, and he can’t imagine how Paul would poll more than about 7 percent. Nonetheless, according to Will, “at least 80 percent of Mr. Paul’s votes would come at the expense of the Republican nominee.” Will discusses a Ron Paul third-party candidacy’s probable electoral outcome in states where the GOP would likely win by less than 5 percent. He shows convincingly that Obama would carry all these states in 2012.

“For those of us on the right who do not wish to get back to Karl Rove’s utopia, Ron Paul offers at least an opportunity to protest.”

Paul may announce an independent run, and Will is fuming about this. Although he never uses the term specifically, he considers Paul and his current supporters to be kooks. Why the hell would anyone support a candidate who thinks that “Mr. Obama is only marginally more mistaken than Mr. Paul’s Republican rivals, who do not wake up each morning angry about the 1913 Federal Reserve Act”? These wacked-out supporters “are inclined to accept no substitute because no other candidate espouses anything like his high octane blend of libertarianism and isolationism.” Presumably these wingnuts are keeping us from electing a “moderate conservative,” someone who would put our country back on track the way it was before Bam wrecked the country. Will suggests it is eccentricity, or perhaps mental illness, which fuels Ron Paul’s candidacy. Paul and his backers are trying to turn back the clock to a time before 1913.

None of the Ron Paul supporters I’ve met would fit Will’s malicious description. Most of them are not philosophical libertarians, they’re profoundly disgusted with the Republican candidates that Will finds acceptable. I am such a person. I have never scorned the state in its proper place, nor have I thought about the FRA more than ten minutes in my entire life. Although I consider it a mistake to allow government to play politics with lending rates and the monetary supply, I do not sit up nights agonizing over what happened in 1913. I loathe the media and political class and find nothing significantly different in what the two national parties have to offer domestically.