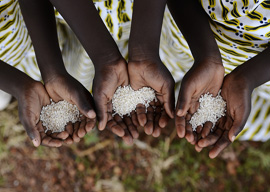 This year marks the 20th anniversary of one of the odder best-sellers of the 1990s, polymath Jared Diamond’s ambitiously entitled but rather dry Guns, Germs, and Steel: The Fates of Human Societies.

Why did a book stuffed with more arcane data about the history of crops and livestock than most readers care to know ignite such unbalanced enthusiasm? This question is especially curious considering that Diamond’s previous book, the more interesting The Third Chimpanzee: The Evolution and Future of the Human Animal, a collection of Diamond’s fascinating articles from popular science magazines, had failed to make much of an impression.

The difference is that Diamond marketed Guns, Germs, and Steel as the definitive politically correct answer to the query that must trouble anyone with much awareness of the world: Why are some races of humans so much more economically and scientifically productive than other races?

Diamond charmingly phrased this as Yali’s Question, after a Melanesian cargo cultist the UCLA physiologist had met on a bird-watching trip to New Guinea:

“Why is it that you white people developed so much cargo and brought it to New Guinea, but we black people had little cargo of our own?”

It’s not that New Guineans don’t care about cargo. In fact, after observing American and Australian military men deposit upon jungle airfields vast quantities of delightful goods, they formed cargo cults to replicate the white man’s magic. As William Manchester recounted in Goodbye, Darkness: A Memoir of the Pacific War:

The native is no dummy. He can imitate any rite. He puts together a facsimile of a telephone with tin cans and string. He shuffles papers and speaks into the can; then he searches the sky, predicting, “Moni i kam baimbai.” (“Money he come by and by”)…

Frustrated, a New Hanover tribe formed a “Lyndon B. Johnson cult” in the 1960s. Even in New Guinea people knew that nobody was more effective with gadgets and telephones than Lyndon Johnson…. Somehow they amassed sixteen hundred dollars for a one-way ticket from Washington to Moresby and sent the ticket to the White House. Johnson didn’t arrive…. It seems a pity. LBJ would have made a marvelous king of the blackfellows, and he would have enjoyed the job immensely.

And, of course, Diamond’s readers assumed that the racial disparities in accomplishment couldn’t be because some races had been evolving under conditions that select more for, say, foresight or cooperation. In contrast, New Guineans, living on the equator, have less need to worry about how to prepare for onrushing winter than do, say, Swedes or Koreans.

“Most readers have never noticed that Diamond’s own Darwinian logic undermines the reassuring moral of his book.”

No, that just couldn’t be true. After all, Diamond says, New Guineans strike him as smarter on average than Americans. Granted, Diamond didn’t have any evidence for this assertion of his, other than evolutionary hand-waving:

And no justification for Diamond’s hypothesis has emerged in the two decades since Guns, Germs, and Steel was published.

After Diamond’s rather eye-rolling opening about high-IQ Papuans, his book settled down into a productive groove, working what has become the dominant trait of intellectual conventional wisdom in the 21st century: antiquarianism.

For example, you may have noticed the countless number of articles in recent years explaining why property values in African-American neighborhoods tend to be low. Occam’s razor would suggest this is related to the current high crime rates among blacks. After all, real estate markets are highly responsive to trends. But that’s not how you are supposed to think these days. Instead, you should blame all the contemporary troubles of blacks on redlining during the New Deal.

Stephen Jay Gould had popularized the postmodern form of antiquarianism in his 1981 book The Mismeasure of Man by attempting to discredit the 20th-century science of psychometrics by telling shocking stories, sometimes unreliable, about 19th-century scientists.

An important thing to notice about Diamond, however, is that he really is from the more hardheaded side of our intellectual realm. Gould’s widow funded a lawsuit against Diamond. And cultural anthropologists absolutely hate him, partly for usurping the public intellectual role that they used to inhabit during their Margaret Mead heyday, partly because they vaguely suspect, with some reason, that he’s more a man of the right than he lets on for public consumption. (For instance, Diamond is unenthusiastic about mass immigration from the Third World, while subversively suggesting that European immigration is one reason the Dominican Republic is less horrible than Haiti.)

Diamond helped spread the current antiquarian penchant by making it less precious than Gould’s version. Instead of just blaming the differences between races on the hallucinations of long-dead gentile scientists like Gould did, Diamond admitted that there were significant differences in environment between the continents.

Yet that leads to a dangerous conundrum for Diamond, who is hardly unaware of the Darwinian insight that nurture can change nature. As I pointed out in my 1997 review of Guns, Germs, and Steel in National Review:

Diamond makes environmental differences seem so compelling that it’s hard to believe that humans would not become somewhat adapted to their homelands through natural selection.

When I met Diamond a few years later at financier Michael Milken’s annual confab in Beverly Hills, we were chatting amiably until I haltingly alluded to this fundamental paradox in his book. A worried look came over his face; he grabbed his lecture notes and took off out of the auditorium at about 5 mph.

But most readers have never noticed that Diamond’s own Darwinian logic undermines the reassuring moral of his book.

He struck a lucrative chord with contemporary opinion by attributing the post-1492 European expansion to the prehistoric domestication of grains and animals in the Fertile Crescent.

Phrased like that, Diamond’s thesis sounds silly, but that’s because Diamond pulled off a sleight of hand. When you talk about race, what modern Americans are interested in is, of course, blacks. But instead Diamond’s thesis is largely about why Europeans came to dominate Amerindians.

Indeed, that’s a worthy topic in its own right. The Spanish conquests of Mexico in the 1520s and Peru in the 1530s are among the most dramatic events in world history. The contending cultures seemed relatively evenly matched, with high population densities and spectacular monuments. While the Spanish were battle-toughened after recently completing their 800-year Reconquista of Spain from the Muslims, the Aztecs and Incas enjoyed the home-field advantage. Yet in both cases a few hundred conquistadors were able to pull off stunning triumphs.

As Diamond notes insightfully, the Aztec and Inca civilizations suffered from subtle weaknesses, such as a lack of domestic animals, largely stemming from the New World being so isolated from the larger Afro-Eurasian Old World.

Moreover, innovations in one part of the Americas had a difficult time making it to other parts due to the rugged terrain and the north-south orientation of the landmasses. Physicist Gregory Cochran writes:

The geography of the Americas greatly inhibited contact between Mesoamerica and the Andean civilization: even today the Pan-American Highway doesn’t go all the way through.

Llamas, for instance, were domesticated in the Andes, where they were used as pack animals. But they didn’t make it north of the Isthmus of Panama, leaving the Aztecs without any beasts of burden.

The shortage of large animals to domesticate in North America was the fault of the Indians, however, as Diamond himself had pointed out in one of the more memorable chapters of The Third Chimpanzee. The most likely reason that horses, mammoths, camels, and other potentially useful creatures had suddenly gone extinct in the New World when the ancestors of the Indians arrived is because the Indians ate them.

Moreover, as Diamond suggested, it was harder to spread New World staples like potatoes and corn across latitudes than to transplant Old World wheat across longitudes.

Perhaps the lack of population density in pre-Columbian North America relative to Mexico was due to the long process of adapting Mexican corn to shorter growing seasons. When the Pilgrims arrived in 1620 and Squanto rescued them by showing them how to grow corn, Massachusetts Indians had only recently mastered its cultivation.

It’s possible that if Europeans hadn’t arrived in 1492, accidentally introducing various epidemic diseases to the New World (the “germs” of Diamond’s title), the Indian population of what’s now the northern United States would have exploded as Indians flourished on high-calorie corn.

But the truth is that few in America’s chattering classes today are terribly interested in New World Indians, whether they are on reservations or arriving from Latin America. Instead, they are obsessed with the manifold differences between black Africans and everybody else.

This is not all that unreasonable because recent advances in genetic science suggest that the prime division is between sub-Saharans and the rest of humanity. While the Out-of-Africa theory of human origins is usually positioned as explaining why there are no differences between Africans and the bulk of mankind, it suggests that every racial group outside of sub-Saharan Africa, even New World Indians, are more closely related to each other than to Africans.

For example, Diamond’s “germs,” such as malaria, for which, as Diamond notes, Africans were genetically better adapted via their sickle cell mutation, were a powerful deterrent to European expansion into the tropics.