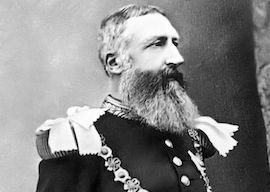 I remember it well. My friend and neighbor Baron Lambert had my wife and me to dinner at his Gstaad chalet, and the talk turned to Belgian history. Philippe Lambert’s grandfather, a banker, had lent money to King Leopold of the Belgians in order for the monarch to buy some real estate in Africa. He bought the Congo, made Philippe’s grandfather a baron, and paid back the debt in full.

Talking about kings, I brought up the fact that a latter King Leopold had done the right thing when he decided to remain in Belgium after surrendering, as head of state, to the invading German army led by generals Guderian and Rommel. The British had other plans. They wanted him to escape to London and lead a resistance from there. The king refused and after the war had to give up his throne and was openly called a collaborator by the winners. Some collaborator. He remained among his flock and did his best to alleviate their burdens.

That is when one of my fellow guests—a man with no lips, shifty eyes, and a Uriah Heep manner—patted me on the shoulder and told me that I should leave such matters to the experts—“you seem like a very nice chap but we know better” type of condescension. I know his type very well, Europe being full of them. They live off our taxes as bureaucrats of the E.U., decide on how we live our lives, and pretend to represent us although they are unelected officials—appointed by other unelected officials.

“The fact that the ancient Greeks invented almost everything doesn’t exactly make me wish I had been born in Africa and followed that culture.”

Unfortunately for the shifty-eyed freeloader, I seem to forget my manners when being condescended to by creeps like him. I told him what I thought of him and his kind, threatened him with physical violence, and warned him to keep his mouth shut or else. My host the baron pretended not to hear and poured himself a stiff drink while his butler looked abashed. Philippe and I laughed about it the next day. “I wonder what he’ll say when back in Brussels,” said Philippe, “that the Lamberts have really gone rogue.”

Now, please don’t get me wrong. I am not a Neanderthal, and I do not go around threatening to beat people up when disagreeing about something. But this man reminded me of the types who write for The New York Times, types who bootlick upwards and kick downwards. Lefty propagandists who write and say smart lies—not whoppers, but always to the detriment of Christianity, Western civilization, the armed forces, the family, and, of course, the police. You know the type. A recent mega-article in that New York rag by one Jill Lepore, a woman posing as a historian, exhorted her readers never to use the word “nation.” She went on to say that “Nationalism is an abdication of liberalism. It is also the opposite of patriotism. To confuse nationalism with patriotism is to mistake contempt for love and fear for valor.”

Furthermore, according to Lepor-ello, “Nation states are people with a common past based on half-history, half-myth.” Well, a remark like that is to be expected from people like her; her kind puts the immigrant before the native-born, the transnational interest before the national or local one, the racial minority before the majority. I am rather proud of the Greek myths and of German tales of Wotan. Plus, the fact that the ancient Greeks invented almost everything doesn’t exactly make me wish I had been born in Africa and followed that culture.

Lepore is flattering the woke mandarins of social media, Big Tech, and departments of the Fortune 500. Basically she is for the 1 percent before the 99 percent. Yet she disguises her subversion with polemical anti-Trump politics as she marshals the facts to suit her arguments. Again, you know the type: the kind who likes the metropolitan brand of democracy, as in, elite Georgetown circles and L.A. fund-raising homes. And backs the kind of politician who gives speeches in Congress about art funding in Harlem but never about jobs in Ohio.

I predict that the N-word—and I don’t mean the bad N-word, I mean the one for “nationalist”—will soon join the bad word as one and the same. It’s actually not very hard to construct arguments against anything; the more polemical, the better as far as the internet is concerned, and the more dubious the evidence, the better. Globalists backed disastrous wars in Iraq, Afghanistan, and Libya, and will continue to do so. And while hundreds of thousands of illegal aliens storm our borders, malignant organs such as the Times will harp against cruel nationalists like you and me who prefer law and order. So the next time you are at a dinner party—I cannot get you invited chez le baron because poor Philippe died some time ago—and some shifty-eyed bureaucrat or journalist pompously gives his or her opinion, do a Taki and threaten them with a pie in the face. They’re all cowards anyway, and will most likely faint. If they do, eat their pie.