Ruling the Mat in Miami 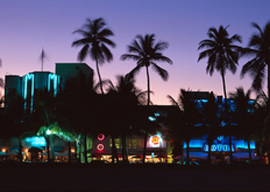 MIAMI BEACH—To the Mecca of brutalism, a place that rivals Marbella for vulgarity, with sprawling, marble-clad palaces, boxy condo blocks, and concrete lumps replacing Old World wrought iron and glass canopies. Clubs down here mean strippers and dancing poles, none of that all-white tennis garb and polite applause after a passing shot down the line. People order jumbo daiquiris in giant glasses and swallow them quicker than the girls shed their tops. Everyone holds large containers of liquids at all times, and gold hangs from the necks of men as well as women.

Tattoos cover men’s arms, torsos, and legs, as well as those of some women, especially the uglier ones. This is Miami Beach at its gaudiest, with traffic jams rivaling those of Los Angeles, and with young beautiful models walking to work and running the gauntlet of sex-starved Hispanic waiters and busboys.

“I ended up fighting for a gold medal with someone twice my size.”

Everyone speaks Spanish and most of the people are Cuban and—believe it or not—every person I came across was nice, from the Cuban waitress…to the gay Cuban receptionist…to the sexy Cuban girl who worked the hotel terrace as a greeter…to the countless young Cuban waitresses my team and I tried to pick up on Ocean Boulevard. Havana has come to Miami, and the latter has benefited. When Fidel took the capital back in 1959, every doctor, businessman, and intellectual took flight. They were all white. Black, uneducated Cubans remained behind. A totalitarian regime ninety miles from Florida has been the reality ever since. But things will change the moment Fidel and Raul are gone. In the meantime, Cuban Miami is a great success, and there are no mustaches among their women, unlike back on the island. The person who imports waxing products to Cuba after Fidel will become a billionaire.

I am down here in the migratory pattern of the perma-tanned for the Grand Masters World Judo Championships. The last time I won the thing was in 2008 in Brussels, and I have medaled every time since. This was going to be my swan song, something I have threatened before, especially since an Austrian by the name of Marius Vizer bought the International Judo Federation and runs it like his fiefdom. This wily Austrian corporal charges large monetary sums for registration and gives nothing in return. In Miami the organizers had volunteers doing the heavy lifting, which led to total confusion. There were more than 850 competitors at $150 each. I was put in a younger age group because there were no competitors in my own. I ended up fighting for a gold medal with someone twice my size and who under his own admission had not been required to weigh in.