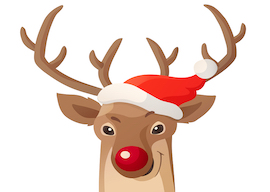 NEW YORK—Everyone’s talking about the article in the Huffington Post that has shown us the racism, homophobia, child abuse, bullying, sexism, and exploitation of the handicapped that lie at the bigoted heart of the Rudolph the Red-Nosed Reindeer Christmas special, but I don’t think it goes far enough.

It’s time we got rid of every holiday tradition that originated in the Dark Ages of a united grievance-free country.

Rudolph the Red-Nosed Reindeer, as I will shortly prove, is not just outdated, it’s a Communist attempt to turn our children into substance-abusing sex slaves.

I think we should junk that show, send it to the graveyard of ’60s television, get rid of Gene Autry—let’s face it, once that song gets into your head, you can’t get it out for days—and replace it with either the Chuck Berry version (“Santa make him hurry, tell him he can take the freeway down”) or the Joe Diffie version, “Leroy the Redneck Reindeer,” which tells the story of the reindeer who drives to the North Pole in his pickup wearing overalls and a John Deere cap.

Because the main advantage of both songs is that, right out of the chute, they get rid of the whole red-nose thing. When Chicago copywriter Robert May wrote the Red-Nosed Reindeer children’s book for a Montgomery Ward Christmas giveaway in 1939, the Soviet Union had just invaded Poland after signing a non-aggression pact with Hitler.

Helloooooooo! Wake up, people! Did anybody check Robert May’s party affiliations? Yeah, let the RED reindeer take over. Let’s do things differently this year. Sure, there are nine reindeer pulling the sleigh, but all the shots are called by the dictator reindeer, the strongman who solves all our problems for us.

“It’s a Communist attempt to turn our children into substance-abusing sex slaves.”

Then there’s the fact that Alcoholics Anonymous had recently been founded in Akron, Ohio, by Bill Wilson and Bob Smith, two apparently hopeless drunks who no doubt had the famous red whiskey nose popularized by W.C. Fields. Coincidence? I think not. We know what makes a nose glow, don’t we? And it’s not rosacea, acne, or the flu. The guy was a writer, obviously he was a drinker, it was one of those secret-handshake things that people in 12-step programs do so they’ll recognize one another at the West Hollywood breakfast meeting. It’s obviously a subliminal entrenched in the story so that the song says “Let the drunk speak, listen to the drunk,” in a way that will be accepted by the youth of our nation!

Would that it stopped there. I now ask a simple question:

What are Reindeer Games anyway?

Has anyone ever seen a reindeer playing a game? I suppose we could ask a Laplander, but I’m guessing no.

All those horns, all those hooves, the mixing of genders, the supple skin of the sleek does, the implied sadomasochism when they lock their antlers and toss each other around—Rudolph is obviously being told he’s not kinky enough for the big leagues, if you know what I mean and I think you do.

The story is an elaborate grooming technique, full of hints of forbidden pleasures that, because you’re socially awkward and wear glasses, you’re not allowed to experience.

Until…Santa tells you how much he loves your nose.

Need I stop here to review how many times, in the great literary works of history, the nose has been used as a substitute for another male appendage, not to mention the persistent belief that a prominent nose, a hooked nose, a protruding nose, or any kind of large nose has the same meaning, in certain circles, as big feet?

They’re not just toys, are they? They’re Misfit Toys! They’re broken, damaged, misshapen, weird in one way or another, but in the hands of Santa they become wondrous transformative treasures that have found their place in the universe. Just like you, little Rudolph.

Or Freddie. Or Timmy. Or Billyboy.

You need Santa to reshape you.

Why does the outcast elf want to be a dentist? Who gave him that oral fixation?

I can’t even go on with this. It leads us to places that would shock sex offenders serving life sentences in the Texas Department of Corrections.

But I have one last question:

What about Bumble the Abominable Snow Monster?

If you’ll recall, Bumble’s goal is to eat Rudolph’s entire family, but he’s foiled by Hermey the would-be dentist, who extracts all his sharp teeth.

Who is Bumble really and what does he represent?

Bumble is huge and white. He obviously exemplifies the decadent entitled bullying Caucasian race attempting to destroy diversity and inclusion in this nation, especially the inclusion of losers like Rudolph and Hermey, because Rudolph’s “big feet” are a threat to the established social order and Hermey’s bizarre fixations on the mouth are destructive to the future of civilization.

The extraction of Bumble’s teeth is a revolutionary social message: Shut up, white guy. The Reds are in charge now. We’re gonna run Santa down the freeway and right over your sorry ass.