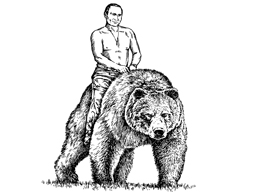 “God in heaven, Russia on Earth.” So say the Serbs, who have been programmed to see Russia behind every turn of good fortune. Westerners are now being programmed to see Russia behind every turn of bad fortune. To the Kremlin, it is the same difference: Both mean the Third Rome is strong. This perceived strength serves multiple narratives in the West—that the U.S. didn’t really want Trump, nor the U.K. Brexit. Yet with every Russia panic, the Western media burnishes Vladimir Putin’s armor a little brighter. After all, if he is powerful enough to swing Western elections, what hope have ordinary Russians to challenge him? It is an achievement of some aplomb for The Guardian and The New York Times to have become some of the Kremlin’s most powerful mouthpieces.

A fortnight ago, Putin tested this media amplifier with a speech describing various new Dr. Strangelove-style military capabilities. Underwater missiles! Winged missiles! Nuclear-powered winged missiles! London shoppers were soon exposed to headlines in the—Russian-owned—Evening Standard about a ‘New Arms Race.’ It took the boring specialist media to conclude that nothing much had changed strategically, and that the speech “was almost entirely for domestic consumption and geopolitical posturing.” But by then the message had gone out—showing that propaganda remains the Kremlin’s most cost-effective weapon.

“If polarization is the key to chaos, then Putin is a master.”

Now Russia has blown a foghorn into this global media microphone. Last Sunday, a former GRU colonel and British intelligence asset named Sergei Skripal was exposed to a Russian-made nerve agent on British soil. He and his daughter are now critical, and the U.K. in a media and political paroxysm. Granite-faced Home Secretary Amber Rudd has swooped down to Salisbury—where the attack took place—her skirts billowing like Cruella de Vil. Theresa May’s hand has gone to her hip, only to find there is no saber there to rattle. The initial range of possible countermeasures—banning Russia Today from the U.K.; withdrawing from the Russia 2018 World Cup—revealed an absurd asymmetry. Skripal was a naturalized British citizen; collateral damage has been wide (38 people, including one British bobby in serious condition); and the attack took place in the home of the U.K. Land Forces, which are headquartered on Salisbury Plain. Numerous current and former high-ranking military personnel live in the area with their families, which is why Skripal was selected as a target. For Britain to deploy to a similar environment within Russia would be beyond fiction.

The British government is now engaged in shuttle diplomacy, with the normal range of financial and political sanctions being discussed. As usual, Britain’s role as a hub for overseas Russian money—recently dramatized on the brilliant McMafia—is under scrutiny. “Diplomats” are being expelled with the ridiculous assertion that Russia’s 21st-century intelligence capabilities will thus be degraded “for decades to come.” Up to a dozen suspicious deaths—including one that came immediately on the heels of Salisbury—are now to be revisited by U.K. law enforcement. At the hardest end of retaliation appear to be NATO reinforcement and cybermeasures, including potential damaging leaks about Putin’s self-enrichment program.

Yet all but the last of these will only strengthen Putin as Russia goes to the polls this Sunday. Like the waning, sclerotic dictatorship it is, Russia is seeking isolation. With domestic expression now severely curtailed, the economic pain of isolationism has no political outlet. This is why Mrs. Thatcher resisted sanctioning South Africa in the 1980s: because she knew such measures would punish those below, not those at the top. The same is now true of Russia, with which engagement is at a low not even seen during the Cold War. Yet the pressure weighing on Theresa May means she must now build Putin’s wall of sandbags higher (to the extent of issuing a travel warning on Russia). Acting against Britain’s community of regime oligarchs—in the notional hope they will rise against Putin—will similarly consolidate his power at home by disrupting a safe harbor. And forcing the inhabitants of Londongrad to cooperate against the Kremlin? Well, Salisbury has shown us what comes of that. No wonder Putin responded so sardonically to a walking question from a BBC reporter this week.

Russia’s ability to leverage the West to her own advantage also has deep cultural currents. The “social justice” revolution under way in the West was seeded for decades by Russian influence. This process was plainly outlined by a much earlier defector, Yuri Bezmenov—who explained how demoralization was a key stage toward undermining the cultural mores of a free society. The vicious divisions emerging in the West are in large part the result of this nu-Marxist thinking.