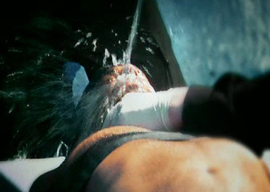 A detailed report in The New York Times tells about a hearing taking place in the Russian Parliament emphasizing alleged American human-rights violations. Among the featured abuses are the American practices of waterboarding suspected terrorists, historical abuse of minorities, and the mistreatment of Russian orphans or abandoned children adopted by American parents. It seems that in recent years Americans have been adopting Russian children who have been warehoused in large cities after having been brought in from surrounding rural areas.

Having known people who have availed themselves of this service, I believe this form of adoption allows better positioned Americans to acquire white children who generally look like themselves and who have a reasonable chance of exhibiting at least median cognitive abilities.

“Although the US may not be the most vicious great power in human history, it is by far the most insufferably righteous.”

Usually this adoption procedure results in a happier situation than what the adoptee could expect to find growing up in a crowded Russian orphanage. But occasionally there are problems: for example, when Russian children die suddenly after having been taken off to the US. This leads to speculation about who’s responsible for the fatality. In recent months Russian dignitaries have been coming forth accusing the US of grabbing their children and proceeding to abuse them. One female law student quoted in The New York Times expands this accusation against Americans abusing adopted Russian children into a more general broadside against American righteousness:

They tell us they are the parents of democracy, and that we should learn from them, but they are not paying attention to what is going on in their own country.

The New York Times shows no sympathy for the Russian side in this controversy. Since the fall of the Soviet regime, a despotism with which Times reporters seem to have had a heated, intergenerational love affair, their depiction of the post-communist “authoritarian””read nationalist”Russian government has gone from smirking contempt to utter hostility. The reporter attacks Putin’s hold on the Russian government, comments on the disappearance of his political opponents, and cites the tirades of the “nationalist leader Vladimir Zhirinovsky” against the predominantly Jewish Ã©migrÃ©s who left Russia for the US and who have unleashed “anti-Russian propaganda.”