Russians Mine for Gold and an Old Etonian Recalls the U.S.S.R of 1967 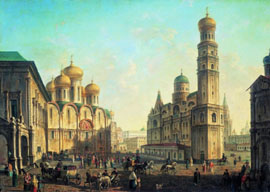 Looking back on it now, “lunacy” is the word that springs most readily to mind. It was Easter 1967. I was just sixteen and had signed up to go on a school trip to Russia for the holidays. I say “lunacy” because the idea of taking a bunch of Etonians to Russia would be a tall order under any circumstances; taking a gang of rampant teenage Etonians (the tail-suited male equivalent of St. Trinian’s) to Moscow, Leningrad, and Kiev in 1967, was brave if not bordering on insanity. Russia was deeply communist in those days. They were suspicious of everything Western, and it was harder to get into than Sudan is today. We were issued a comprehensive list of rules and instructed to be on our best behavior at all times. The chances of our abiding by those rules was as likely as Jacques Mesrine agreeing to behave himself in prison. Knowing that Russian students were mad for Beatles records and trendy clothes, we were all armed to the teeth with blue jeans, chewing gum, and 45s of “Please Please Me” and “From Me to You,” which we sold for a whopping great profit. At that time there were only half a dozen of us studying Russian at Eton, which we played to our advantage, sneaking out at night to visit girls and get drunk on repellent sweet champagne and vodka shots. As we were constantly followed, it seems incredible that none of us got into any serious trouble, but somehow we avoided it.

Instead it turned out to be the trip of a lifetime, the memories of which remain as clear today as they were forty-three years ago.

“There was no such thing as makeup in Moscow, and most of the girls wore boiler suits or mid-length eau de nil serge skirts. A far cry from today!”

When you are sixteen, your concern for safety and comfort is happily scant, for every hotel was colorless and dingy, with hospital beds to sleep in and light bulbs hanging loose from the ceilings. Much to our delight, the corridors were patrolled by female impersonators sub-impersonating Rosa Klebb and an endless supply of murky men in leather coats and matching hats. It was perfectly wonderful. One thing was absolutely sure, and that was that the chances of seeing, or better still getting to know, a pretty girl were zero. There was no such thing as makeup in Moscow, and most of the girls wore boiler suits or mid-length eau de nil serge skirts. A far cry from today! Oh where, oh where were they hiding?

Apart from the Hermitage museum’s treasures and the Winter Palace’s decadent beauty, we enjoyed watching men fishing through holes in the frozen Neva River and visits to GUM, the Russian equivalent of Harrods pour les pauvres. By the greatest piece of good fortune”for us, that is, but not for him”Marshal Malinovsky had died at the start of our visit, possibly because of it, and he was to be honored with a state funeral in Red Square. Rodion Malinovsky was a Soviet legend, a veritable “hero of our time.” His war record was truly impressive; it was Malinovsky to whom Stalin entrusted command of the 66th Army at Stalingrad. After World War II, he was appointed commander of the Transbaikal-Amur Military District in Russia’s Far Eastern region, as wild and savage a place as any on the globe.