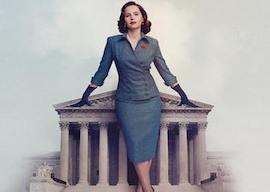 Christmas is supposed to be a holiday for Christians, but this year Santa’s bringing a very special present for America’s Jews: the gift of seeing Ruth Bader Ginsburg the way we wish she looked. Opening in theaters December 25th, On the Basis of Sex tells the story of a plucky young RBG as she risks everything in a quest to become a nationally known feminist hero.

Does she succeed? I’ve purposely avoided the trailer, as I’m fearful it might give away the ending.

The actress portraying the young Ginsburg is Birmingham-born Felicity Jones, a Brit who is most definitely not Jewish, unlike the brittle SCOTUS scarecrow she’s portraying. In fact, Jones could not look less Jewish if she tried. This girl is so Aryan, she could give Himmler’s corpse a boner. And yet she’s portraying a woman who—hmm, how to put this gently?—is the reason Jewish men often date outside the flock. Not since Warren Beatty decided to portray Dick Tracy without facial prosthetics has there been a greater physical disconnect between actor and subject.

Felicity Jones’ nose is what Jewish women are shown in the plastic surgeon’s office as an enticement to plunk down ten grand on rhinoplasty.

“I can totally give you that nose, Hadassah. And for a 10 percent cash discount, such a deal!”

Yet the casting of shiksa Jones in the role of a leftist Jewish icon has not caused very much outrage among U.S. Jews. Compare that with our other favorite colicky victim group: blacks. If a light-“skinded” black actress is cast to portray a dark chocolate black celebrity, all hell is guaranteed to break loose. The casting of caramel Caribbean beauty Zoe Saldana as dark-skinned jazz legend Nina Simone in a 2016 biopic completely sank that film before anyone even had the chance to actually see what a piece of crap it was. And just a few months ago, megastar Dwayne “The Rock” Johnson was pummeled in the black press for daring to portray a live-action version of the popular folkloric American hero John Henry. “Big John” may never have actually existed, and even if he did, no one knows what he looked like, but he’s traditionally been portrayed in artistic depictions as dark-skinned, so blacks shit a bunch of rail spikes over the casting of the biracial Johnson.

To be clear, this black outrage is not about accuracy. There’s never an outcry when a dark-skinned actor is cast in the role of a light-skinned real-life figure. The casting of “no question she black” Taraji P. Henson in the role of “so light she could’ve fooled David Duke” Katherine Johnson in last year’s unfortunate hit Hidden Figures provoked no anger. Darkening is fine, just don’t dare lighten. This can be viewed as “racially healthy” (cue alt-right blogger: “Good fer them bein’ comfortable with their color! We should all be so willin’ to take pride in our race!”) or dishonest (cue opposing alt-right blogger: “Blacks worship the light-skinned among ’em, but they get bullied by their overbearing dark-skinned wimmin into pretendin’ that ‘black is beautiful’”).

The actual answer is probably a healthy mix of column A and column B, but that’s not the focus of this piece. What I’m interested in is how little outrage the goyification of Ginsburg has provoked. Indeed, as the most influential racial/ethnic group in Hollywood, Jews don’t just tolerate goyifying, they’re the ones doing it. Let’s look at that most sacred of Jewish cinematic genres: the Holocaust film. The movie that launched it all—NBC’s 1978 miniseries Holocaust—starred as the doomed family of Jews a parade of gentiles, including James Woods (not Jewish), Fritz Weaver (very not Jewish), and Meryl Streep (a descendant of William Penn…very very not Jewish). The hit 1988 ABC miniseries War and Remembrance saw the most-assuredly-not-Jewish John Gielgud portray a heroic Hebrew gassed by Nazis. 1989’s Triumph of the Spirit featured Willem Dafoe, Costas Mandylor, and Robert Loggia (a goy, a Greek, and a guinea) as spirit-triumphant Auschwitz Jews. 1990’s Max and Helen saw South African Alice Krige and Treat Williams, a descendant of the strikingly not Jewish U.S. Founding Father Robert Treat Paine, as lovelorn death-camp Jews. Jakob the Liar? Robin Williams the goy. In Escape From Sobibor, Aryan übermensch Rutger Hauer portrayed Jewish Holocaust hero Sasha Pechersky despite looking more like one of the SS men who would’ve shot Pechersky on sight.

The list goes on. The lead actress on the award-winning Amazon hit The Marvelous Mrs. Maisel, a series about a Jewish housewife who decides to become a stand-up comedian, is a mick named Rachel Brosnahan.

Placed in this context, the casting of Felicity Jones as Ginsburg seems practically expected.

So why do we see such a markedly different reaction from Jews as compared with blacks when it comes to being racially/ethnically altered for the screen? Well, there are several reasons. The first is something I’ve written about before—the remarkable Jewish ability to be either white or “ethnic” depending on the needs of the moment. Jews don’t mind being seen as white; we just don’t want to be seen as white when it disadvantages us. Portraying Holocaust victims as strapping Aryans is to our benefit. It makes the Huns who Holocausted us feel perhaps a little bit more guilty, because now they see their own likeness in the faces of Hitler’s victims. “Look what you did, you monsters…you just gassed Frodo Baggins” (Elijah Wood, extraordinarily not Jewish, killed in a death camp by Gary Sinise in 1992’s The Witness).

Of course, try parroting the line favored by nutcases like “Calypso Gene” Farrakhan that the Holocaust was nothing more than white-on-white crime, and you’ll find that, magically, we’re now no longer white. Indeed, how dare you see us as white. Just because we cast white actors to play us doesn’t mean you should see us as the people we cast to play us in the movies we produce about us.

Another factor in cinema goyification is self-esteem. We Jews can be very self-conscious about our looks. Sure, so can everyone. But we’ve made an art form of it, milking it for comedy and pathos, as well as keeping the garages of Beverly Hills plastic surgeons well-stocked with luxury cars. Jewish women want to look like Felicity Jones. And most Jewish women aren’t more than a deviated septum away from actually being able to achieve that goal. In other words, fantasyland Ruth Ginsburg is not an unattainable goal for the average Jewish gal. To that extent, there’s something affirming about seeing a better-looking reflection of ourselves on the screen. It’s not just how we want to look, it’s also how we can look, if we’re willing to spend a few bucks. A dark-skinned black person, on the other hand, ain’t ever gonna be white. You can Michael Jackson the hell out of yourself, but the best you can hope for is monstrous freak. Dark-skinned blacks have little choice but to embrace the reality of who they are and how they look, because there’s really no changing it. There are a thousand online essays, on sites like The Root, Ebony, Salon, Mic, etc., in which dark-skinned black girls write of the struggle to come to terms with their looks. Their skin tone, their nose, their lips. Because coming to terms is their only realistic option, since altering isn’t much of a possibility. But Jews understand that Melanie Mayron 1978 can become Melanie Mayron 1988 with just a four-hour outpatient procedure.

So we don’t mind the idealized images, because in a way they give us comfort. We don’t see what we can never become, but what we can.

Then, of course, there’s the political motivation. Ginsburg is pushing an agenda that is near and dear to many (most?) American Jews. So, just as in the case of Holocaust films, there’s probably a perception that whites will more easily accept that agenda if they think it’s coming from one of their own. A spoonful of shiksa helps the bad medicine go down.

And finally there’s Ginsburg herself, who has been slammed, even by her fellow leftists, for her propensity for crass self-promotion and self-aggrandizement. She’s probably as pumped as everyone else to see her ethnically cleansed onscreen depiction.

Well, actually, not everyone’s pumped. It took some searching, but I finally found a roaring dissent in the sea of silence regarding the Ginsburg/Jones ethnic switcheroo. Marissa Korbel is a self-described “bleeding heart lawyer” and “award-winning essayist” who writes for Harper’s Bazaar, Guernica, and Bitch magazine. Last week, she penned a piece for the online literary journal The Rumpus that I’d wager is the single most honest piece of writing on the ’net regarding Jews and the Aryanization of Ruth Bader Ginsburg.

Korbel begins by recounting her insecurities as a self-conscious Jewish seventh grader:

I sat in my mother’s passenger seat—a beige pleather upholstered bench—and stared at my reflection in the flip-down mirror, flattening my nasal septum with my finger. I was sitting in the car…imagining how much better I would look if I had a nose job. It wasn’t even a full nose job that I wanted; it was a tiny stitch, maybe two, that would flatten my septum and improve my whole face. I watched as my nose went from vaguely Semitic to American-as-apple-pie white girl with the tiniest pressure. I imagined a stitch, like the kind you got for injuries, an outpatient surgery. It was such a small thing, one I obsessed over all year.

Which leads to her problem with the Ginsburg film’s casting choice:

Ruth Bader Ginsburg has a real face, a strong and lovely face. We can see in photographs what she looked like as a younger woman, and it’s not like Felicity Jones…. Underneath the gentile-fication of Ruth Bader Ginsburg is this larger problem. What is driving this need to make her look less Jewish? To erase her Judaism, minimize her nose, and reimagine her as a movie star hottie instead of as a brilliant, tenacious mind?

From there Korbel launches into a tirade about “white supremacy” and Black Lives Matter, and at that point the vulnerable seventh grader vanishes and the rigid ideologue appears in her place. It’s a shame, because it was a raw and authentic piece before it fell to clichés. All the same, good on Korbel for expressing publicly what I guarantee most Jewish viewers, reviewers, and pundits thought privately about Jones’ casting. Someone had to say it aloud.

But don’t expect Korbel’s essay to be picked up by national Jewish news and opinion sites. Even its concluding and comforting descent into leftist banality can’t make up for the disquieting honesty of the rest of it. We Jews are generally an introspective lot, but every now and then we encounter an abyss into which even we prefer not to gaze, lest we find Ruth Bader Ginsburg’s Semitic mug gazing back at us.