Sailing Amid Rothschilds and Russians 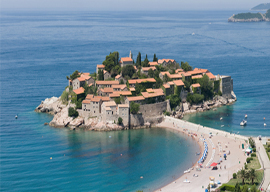 PORTO MONTENEGRO—My friend John Sutin, the world’s most generous man, could not believe his ears. Montenegro’s Tivat Airport would not allow him to land because more than 80 private jets had already booked parking spaces. So we landed in Dubrovnik instead. The Croatian airport welcomed us by rushing us through customs as if we were big shots rather than Nat Rothschild’s guests in neighboring Montenegro. A one-hour car trip saw us reach the Bay of Kotor, where the three-day-and-night bash to celebrate Nat’s 40th birthday was taking place. Montenegro’s crammed airport had me momentarily thinking of the notorious terrorist Carlos the Jackal. Had a modern Carlos the Jackal decided to strike in Porto Montenegro last weekend, the capitalist system would still exist, but with a hell of a dent in it.

Bushido awaited us in a perfect place in the middle of the marina, a walking distance from all the activities. My black sailing boat stood out among the ghastly super-yachts, the only graceful lady among a bunch of steroid-pumped behemoths. My problem was the two previous nights in London. Wednesday night went on into the wee hours in the company of Georgie Wells, Lily Robinson, and Ophelia Hohler. And Harry Worcester, Johnson Somerset, and Tim Hanbury. Thursday was even worse, with the Spectator party, the Spencer House party for Everyman’s Library books, and finally, the Tatler pajama party at an unmentionable hotel.

“Had a modern Carlos the Jackal decided to strike in Porto Montenegro last weekend, the capitalist system would still exist, but with a hell of a dent in it.”

Before I go on, I should mention the unmentionable place.

After dining at Bellamy’s, Harry Worcester had the brilliant idea to go to Claridge’s bar for a drink. We were neither drunk nor obstreperous, but we were refused a table although the place was less than a third full. After politely suggesting the management should seat us, the maître d’ came over and asked us to leave. Lord Worcester protested, as did his brother Lord John Somerset. I was at the bar and unaware we were being given the heave-ho. Once I caught on, it was too late. My party was out the door. Here’s what I think happened and why I am outraged: We were speaking English, we were white, and we had not demanded myriad bottles of champagne. The staff was obviously hoping for Gulf people, whose moolah derives from theft of their own countries’ resources. The idea that four English-speaking European gents with four ladies in tow are asked to leave Claridge’s is as outrageous as it’s foul. Talk about reverse discrimination. My only recourse is to ask loyal Spectator readers—and those of Taki’s Mag—to boycott the place until Claridge’s takes an ad on Taki’s Mag and apologizes to us.

It was very hard to appreciate Nat’s blast without sleep. During the first night’s sumptuous dinner at the Lido Mar pool—lined with black-and-white tiles—I drifted among the four hundred guests trying to spot a poor one. And I did. Except for myself, there was also a London-based Iranian nightclub owner who was discovered to have flown in by commercial airline and not to be in possession of a yacht. Rumor had it that he was pilloried in the middle of the marina and that young Montenegrins stuck gum in his hair and put insects in his nostrils, but a serious-minded policeman told me it was only a rumor. I don’t remember much about the party except that I found myself next to one of the richest Russian oligarchs, Len Blavatnik, and the conversation went something like this: