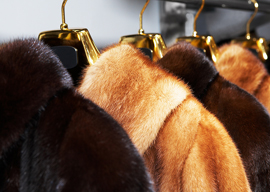 CHATTANOOGA, Tenn.—Just when those New Zealand possum jackets started to take off, San Francisco had to go and ban fur.

Actually, they didn’t ban all fur. Sheep and lamb are okay, because who cares about animals so docile they’re used as symbols of Christ? Sheep and lambs deserve to die because they’re so damn easy to kill. Unlike the wily raccoon, the swift fox, the slick otter, the independent coyote, and the rascally short-tailed weasel.

Of course, no sooner had the Board of Supervisors voted to liberate all the minks, beavers, otters, seals, and chinchillas of the world than yet another group of insane public scolds expressed outrage that the ban is directed solely at female consumers. These people obviously never saw Rudolph Valentino’s closet, much less the wardrobe of Ron O’Neal, better known as Super Fly. Somebody tell every rap mogul that the next time you wanna cue the Curtis Mayfield entrance music in San Francisco, you need to post two goons at the door so the Frisco cops don’t denude your floor-length mink trench or your fox bomber jacket.

And has anyone in San Francisco noticed—it being a gay mecca and all—that furry male runway models at the big shows always wear the coat with no shirt, baring as many rippling washboard abdominals as possible? Extreme fur is such a boytoy uniform that it’s the equivalent in males of a woman wearing a thong bikini on Fifth Avenue. Surely they know this in San Francisco?

I’m gonna assume that angora is exempted from the law, since that particular rabbit is allowed to live after having its skin ripped off, so yeah, fair enough, he’s terrorized but spared.

“You do need fur when you live in a cold place, and San Francisco can be a pretty cold place.”

There also seems to be some kind of distinction between fur taken from animals raised on farms and fur taken from animals in the wild, but it’s the opposite of what you would think. The animal-rights zanies think it’s more cruel to hunt down and kill a wild animal than to raise one in a concentration camp and then execute it.

To the question of, why ban an animal product that will almost immediately drive a bunch of companies out of business, when other businesses that rely on dead animals—Kentucky Fried Chicken, anyone?—are spared, the answer is:

Fur is a luxury product. Nobody needs fur.

Back in the early ’90s, right after the fall of the Iron Curtain, I took a trip through the former republics of the Soviet Union in order to do a series of magazine articles, and one memorable evening I drank vodka with some actors at the main theater in Novokuznetsk, a town in Siberia where they’re very happy to see you. I noticed that all the men wore sable, and I asked them if there was any kind of antifur movement in Russia. They seemed puzzled at first by the question, then when I explained, one of them said, “Is this something dreamed up by emancipated women?”

I may have lost something in the translation, but I thought it was a funny take on America. I answered that, no, there were many women who liked to wear fur, but there was an animal-rights movement that believed you shouldn’t kill the various arctic weasels.

The same guy said, “There are plenty of animals and we need it for the cold”—and the conversation moved on to other things. It was obviously a discussion that amused them but had no real relevance to their lives.