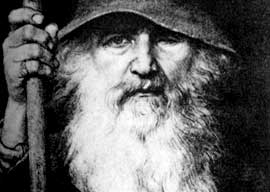 Although Santa Claus doesn”t exist, I am nevertheless convinced that he is white. I take it as a matter of faith that he is as white as his beard and as white as the polar ice caps. As a pale male of exclusively Northern European descent, I also choose to believe that Santa Claus is a man”a heterosexual man who enjoys giving Mrs. Claus a right good rogering from time to time.

Aisha Harris would disagree. Aisha is a blogger for slate.com. She shares a first name with the girl who was married to Muhammad at age six and consummated their marriage at the unripened age of nine”while Ol’ Mo was 53″but I didn’t see this fact mentioned in the article that set off a diarrheal blast of news coverage last week.

The essay was called “Santa Claus Should Not Be a White Man Anymore,” and forgive me if I think it’s a wee bit uppity for Aisha to presume she has the authority to make such declarations. Aisha writes of the shame and pain and confusion and heartache she’d experience every holiday season when she walked out into the Scary Big White World and was ruthlessly confronted with “pale” Santas who had “skin as pink as bubble gum.” Aisha failed to note that if she were still living in her ancestral homeland, she likely wouldn’t be concerned with such trifles. Back in those non-wintry climes, she might even know what horseflies taste like.

The language Aisha uses in her article to deride Santa’s commonly understood physiognomy would likely raise the hackles of microaggression-sniffing progressive watchdogs were they applied to anyone else besides white men. Harris called Santa “melanin-deficient,” a “fat old white man,” an “old white male,” and a “fat white guy”:

…I propose that America abandon Santa-as-fat-old-white-man and create a new symbol of Christmas cheer. From here on out, Santa Claus should be a penguin….That’s right: a penguin….Why, you ask? For one thing, making Santa Claus an animal rather than an old white male could spare millions of nonwhite kids the insecurity and shame that I remember from childhood.

A young black-and-white penguin, you say? Preferably one that would likely morph into a young hermaphroditic rainbow-colored penguin? And then a young human in a hermaphroditic rainbow-colored penguin costume because the animal-rights activists complained? I don’t like where this is headed at all, Aisha. Not one tiny little bit. You get a lump of coal from me this Christmas.

Still, I find it incumbent upon myself to apologize for some of my brethren who joked that if Santa Claus was black, he’d be breaking into houses with an empty bag and leaving with it full. That so-called “joke” was not funny, nor was it appropriate in these very, very, very sensitive times of change and progress.

For all you kids watching at home, Santa just is white….Santa is what he is….Just because it makes you feel uncomfortable doesn’t mean it has to change, you know? I mean, Jesus was a white man, too….He was an historical figure, I mean, that’s a verifiable fact, as is Santa”I just want the kids watching to know that.

In the face of the monster media shit-storm that her comments set off, Kelly would later claim that she was only joking when she said that Santa exists and is white. I’ve scrutinized the video over and over as if it was the Zapruder film and I still can’t tell whether she was serious or not. I’m not even sure it matters.

Naturally, it wasn’t Aisha Harris’s inane and childish plea for a biracial Santa Penguin that led to torrents of media mockery; it was Megyn Kelly’s comments that both Jesus and Santa Claus are white.

It was widely insisted that Jesus was not white, he was Jewish. This would lead to the conclusion that Jews are not white. No further questions, Your Honor.

Most of the snark bombs were directed at Kelly’s allegation that Santa Claus is white. CNN’s Don Lemon, whose skin is more the color of a coconut husk than a lemon, gleefully declared that “Santa Claus is black,” and yet no one complained. From behind his desk in Manhattan, Jon Stewart (nÃ© Leibowitz) mocked the rural rubes who believe in a white Santa: “Yes, West Virginia, there is a Santa Claus.” MSNBC’s Chris Hayes, who is exactly like Rachel Maddow but with far less testosterone, scoffed at the “Fear of a Black Santa.”