Satan, Thy Name is Paul Ryan 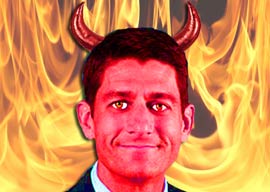 Paul Ryan wants to hurt you.

Oh, sure, he may seem nice, but that’s only a mask.

His sad, puppy-dog eyes mask the soul of a moral degenerate who gets a sick thrill out of “beating up on the poor.” Beneath the veneer of sensible frugality beats the heart of a murderous sadist “trying his damnedest to injure” lesser beings and “rain misery upon the heads of millions of Americans.”

“Paul Ryan is obviously smarter than Sarah Palin, so they can’t attack him for being a Mongolian idiot.”

Paul Ryan is a pickpocket, an extremist, and a selfish, selfish man. He “enjoys punching animals for the sake of punching animals” and will potentially kill one of the remaining Beatles.

Because he’s a sick person, he seeks to slash, rip, cut, gore, impale, and eviscerate the social safety net. In keeping with his twisted torture fantasies, this fanatical extremist wants to personally harm the elderly. This “zombie-eyed granny-starver” would like nothing better than to push your grandmother off a cliff and lock senior citizens inside a Denny’s and set it ablaze.

Paul Ryan fears homosexuals and “DEFENDS HATE.”  Rumor has it that he wants all gay people to eat AIDS sandwiches and donate their T cells to their local Christian charity.

When it comes to gender politics, he prefers to “Let Women Die.” He is fundamentally “anti-women.” He hates women so much he scares them to death. He is pro-rape and is only against abortion because he prefers the taste of newborn babies to that of fetuses.

Paul Ryan is on record as a shameless acolyte of the unconscionably sociopathic Ayn Rand, although he is “little more than Ayn Rand in Christian drag” and shows a frat boy’s “arrested-development reaction to reading Ayn Rand.” As every politically mature and socially aware adult knows, “rugged individualism” rather than “abject whining dependency” is the hallmark of an adolescent mind. Self-interest is bad, and it’s not as if welfare parasites are acting in their own interest. After all, it takes a village to keep everyone on antidepressants, and it’s not as if Karl Marx’s philosophical musings led to far more dead bodies than Ayn Rand’s…right?