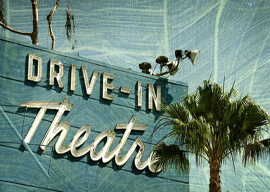 If we”re going to bail out an entire industry, how about drive-in movie theaters? Fewer than 400 remain in America and they all need roughly $100,000 each to switch over to digital because the studios are phasing out the 35mm format. To rescue all those drive-ins would cost around $40 million. Obama spent more than that on advertising buys last month alone.

Unfortunately, drive-in theaters live in the real world, and when something no longer makes economic sense, it dies. As consumers, moviegoers have had it so good, it’s enough to make a libertarian blush. I can go to Amazon.com right now and get movies the second they leave theaters for $3.99. If I”m willing to plop down about $20 for an HDMI cable with an adapter, the whole family can watch it on TV in the living room. Our cable provider offers the same deal via On Demand and for $10 a month, my Roku box presents me with more options than I have time to watch. If I”m willing to break the law, Chinatown is overflowing with bootlegs, and getting any movie in the world is as easy as typing “Pirate Bay.” The only people who still go to stores to rent videos are Luddites.

The studios have bounced back from this barrage of freedom by giving us more reasons to give them our money. Though theater attendance is down in recent years, 3D has justified higher ticket prices and kept the movie business profitable. But theaters need a digital projector to show 3D movies, and after Avatar exploded, theaters that could afford the switch got a digital projector. This fast-forwarded the transition to digital and now we”re looking at the end of the 35mm format. Films will no longer be made on film.

“Unfortunately, drive-in theaters live in the real world, and when something no longer makes economic sense, it dies.”

Drive-ins have staved off annihilation before. Despite a steady decline since the boom of the late 50s, they kept going strong through the late 70s when blockbusters such as Star Wars became so popular, big theaters would have to buy extra copies to meet the demand. After the initial rush, these copies would be lying around and drive-ins would get first-run movies cheap. In 1977 I saw Star Wars at a drive-in and it’s one of my fondest childhood memories. My parents packed pillows and blankets and we sat on the car hood eating popcorn as a life-size Death Star got blown to smithereens. We have at least three generations whose best childhood memories came from the drive-in and it’s hard to stomach the possibility that they”re done for good.

Paul Javener owns the Stardust Twin Drive-In Theater in Chetek, Wisconsin, and he “built that“ with his own bare hands in 2008. The theater nets about $10,000 a year, so spending what he estimates will be $130,000 to go digital means it would take 26 years of giving 50% of his profits to the projector debt. “And even then it wouldn”t make sense,” he adds, “because this is digital equipment we”re talking about here, so it’s only going to have a lifespan of seven years.”

The old projectors were built like tanks and many of those from the early 1930s (when drive-ins began) are still up and running. “The booth that ours came in has graffiti on it talking about when Kennedy was shot, so it probably goes back to at least the 1960s,” Javener says. He says when he built his theater, he thought he had a fun and relatively profitable business that would last forever. Unfortunately, the combination of an inferior economy and superior technology may leave him with a theater that only lived for a few years.

Up in Canada, drive-in owner Keith Stata also saw an indestructible projector and a theater that’s been in a holding pattern for decades and figured he had a good investment on his hands. He figured wrong. “I”m sitting here looking at my retirement go up in smoke,” he told the National Post of the imminent digital apocalypse. Belinda Eckman over in Jamestown, NY agrees: “Digital is coming,” she says with that dry sense of humor all drive-in owners seem to have. “The sky is falling.”