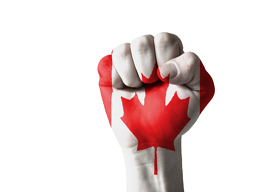 “White supremacists have no place in the armed forces,” screeched the Huffington Post. “Forces members who disrupted Indigenous rally face “severe consequences,”” warned the CBC. “Pathetic, dumb, and dangerous: The Proud Boys make their debut in Halifax,” chided The Coast.

The MSM narrative is that five servicemen (four sailors and a soldier) went to disrupt an indigenous religious ceremony because they”re members of a white supremacist group called the Proud Boys. They can”t defend themselves because they”ve been banned from speaking to any media. Then, with zero verification, the tarnished brass removed these five men from training and exercises and began feverishly capitulating. Minister of National Defence Harjit Sajjan apologized to “Chief Grizzly Mamma“ for offending her (I don”t think this woman is chief of anything). Canada’s top general, Jon Vance, called his men “deplorable,” seemingly unaware we took that term back from Hillary. Their boss, Rear Admiral John Newton, did a 20-minute apology conference where he repeated again and again how much the navy hates Nazis. Canadians sure love saying “Sorry.”

“These five men did not disrupt an indigenous ceremony. They went to a disingenuous ceremony and asked some questions.”

This is ironic considering three of the five men had grandfathers who fought the Nazis in WWII, but that’s only the beginning. Of these same men, two are natives and one is gay. As we”ve stated a million times, the Proud Boys are a multiracial organization with no Nazi ties whatsoever. These five men did not disrupt an indigenous ceremony. They went to a disingenuous ceremony and asked some questions. The Proud Boys heard about an anti-Canada rally as it was happening so they stopped by a local park to check it oot. Turns out the rumors were true. There are videos of this all over the internet. You can see the Proud Boys arrive and begin to ask some simple questions. There was only one native there, Chief Grizzly Mamma, and the only thing ceremonial about the event was when she cut all her hair off and stuck it on a statue of Halifax’s founder, Lieutenant General Edward Cornwallis. The statue was also covered with stickers that said “Fuck Canada” and “No 150″ (marking the 150th anniversary of Canada’s independence). At one point in the video, you see a black immigrant tell one of the sailors he cannot hold a Canadian flag. The protesters didn”t have to follow this made-up rule. They had an upside-down Canadian flag with the word “Recolonize” across it. (I”m sorry, but can you imagine immigrating to a country and then telling people there they can”t wave their flag because it’s a “flag of genocide”? It’s a level of ingrate that boggles the mind.)

The protesters told the Proud Boys that they are on Micmac territory and Canada isn”t a country. They were called skinheads and white supremacists and Chief Grizzly Mamma started picking fights. Eventually, our guys politely left the protest and went to a bar. The “ceremony” continued as planned, and later, when everyone had left, the Proud Boys went back to the statue and took off the hair and the anti-Canada stickers it had been plastered with. You know, the kind of stuff servicemen are supposed to do. They didn”t realize it was being called a religious ceremony until they read about it in the papers the next day.

I”ve been doing interviews with liberal media all day and they all ask the same thing: “Don”t you think it’s disrespectful for your friends to be questioning Micmacs in a town where Cornwallis put a bounty on their heads?” To which I respond, “WHY did Cornwallis have a bounty on their heads?” It always garners silence. The Micmacs were fierce warriors. They were so effective, in fact, that the French hired them to attack the British in what is now Halifax. They were doing a great job of raping and pillaging and murdering us so Cornwallis put a bounty on their heads. Fortunately for the Indians, they were so good at fighting that not one bounty was ever achieved. Journalists don”t know this. Their curiosity stops at “bounty.” I think it’s insulting to the Micmacs to portray them as victims. They were one of our most worthy adversaries, ever.