Saving the World From Book Clubs 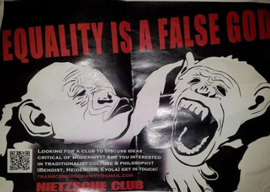 There was a time”or so I”m told, anyway; it was long before my day”when college kids thumbed their noses at authority, fiercely defended the freedom to openly exchange ideas, and demanded something other than more money for booze and weed. Today, however, university students stand firmly in the ranks of the pro bono thought police. On this week’s edition of “Your Impending Leftist Doom”: the University College London Union (or UCLU, effectively the UCL’s student union) has banned the Nietzsche Club.

The Nietzsche Club, nÃ©e Tradition UCL, stands accused of thought crimes, chiefly that of encouraging university students to read books by such noted Bad White Men” ¢ as Nietzsche, Evola, de Benoist, and Heidegger. This predictably touched off an hysterical brown scare at UCL; Timur Dautov, president of University College London Marxist Society, seconded another Marxist Society member’s motion to propose a resolution to the UCLU that would chase the Nietzscheans off campus.

No one is burning crosses, spray-painting swastikas, or kicking over gravestones. So far as anyone is aware, these kids aren”t even using naughty language. No matter, though; the student union tried and convicted the Nietzsche Club of intent to distribute hate thoughts, currently the highest form of treason in Western universities.

“Fear not, gentle reader! Our youthful vanguard prescribes the antidote to the fascist venom slowly enslaving us even as I type!”

Dautov later compared studying Nietzsche to studying Hitler, displaying the dry wit and wry sense of irony college commies have long been famous for. His crony’s motion carried with three ayes, two nays, and a boatload of abstentions, underscoring the apparent might of UCL’s Marxist Society.

For anyone keeping score, a cursory glance at the Marxist Society’s Facebook account seems to indicate that it’s an arm of the International Marxist Tendency, a tepid Trot sectlet whose members are known for their skill at feigning a Yorkshire accent whilst gesticulating wildly and muttering about expropriating an arbitrary number of Britain’s biggest companies. The IMT, in turn, did a positively glowing write-up of the society’s founding conference.

UCLU’s resolution is worth a read, if only for the riotous laughter generally due 19-year-olds who take themselves too seriously. My favorite part, which I will quote directly despite my distaste for the Oxford comma, reads thus:

Fascism is used by the ruling class to divide workers and students along ethnic, national, religious, and gender lines, as a measure to split them and thus weaken their effectiveness as a force and undermine their resistance to policies of austerity, attacks on living standards and public services, and other consequences of the crisis of the capitalist system.

Fear not, gentle reader! Our youthful vanguard prescribes the antidote to the fascist venom slowly enslaving us even as I type! This time they even do me the courtesy of omitting the dreaded serial comma:

To commit to a struggle against fascism and the far-right, in a united front of students, workers, trade unions and the wider labour movement, with the perspective of fighting the root cause of fascism”capitalism. Thus, the struggle is to be united under the programme of a socialist transformation of society.