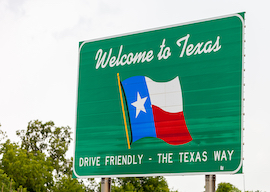 I always liked the idea of Texas—a massive, arrogant, sun-scorched, red-blooded homeland for impenitent cattle rustlers who provided a cultural counterpoint to the sniffly, snobby classes of the Eastern seaboard. Back when America was all about expansion rather than retreat, Texas was far more American than anything you could scrape up from either coastline.

The only glimpse I ever had of this forgotten Texas was in the early 70s while my family was on a road trip from Philly to Phoenix, and all I remember is blazing heat, hundreds of bugs squashed on our car window, and my dad gleefully singing along to Jerry Reed’s “When You’re Hot, You’re Hot” on the car radio. I hardly remember anything else about Texas back then—it didn’t seem like the scenery started catching my eye until we were already halfway through New Mexico—but the heat and the bugs and the raucous country music seemed quintessentially Texan.

My subsequent trips through Texas—and they’re almost always through, never with the intent of staying an hour longer than I needed to—give me the impression it’s the world’s most overdeveloped shopping mall. The endless parking lot that is Dallas-Fort Worth is possibly the nation’s ugliest metro area, maybe even worse than Phoenix. Texas these days seems uniquely devoid of culture in only the way that a place which is the process of shifting permanently from one culture to another can seem. Then again, the Texas that seemed alluring and iconic and more truly American than the rest of America combined—at least in films such as The Searchers and The Last Picture Show —was already dead by the time each of those films was released.

“In the early 1970s, Texas was around 70% non-Hispanic white and roughly 20% Hispanic. If current trends continue, within the next ten years it will be about 35% white and 40% Hispanic.”

…According to an analysis of recent U.S. Census Bureau data by the Texas Tribune, At the time of the 2010 census, Hispanic residents accounted for around 38.2 percent of Texas’ total population, while white residents made up 46.2 percent. As of 2018, the former had increased to 40.4 percent while the latter dropped to 42.3 percent….At the current growth rate, Hispanic residents could lead the Texas population by 2022, the report stated.

Shortly after the article appeared, Texas Senator John Cornyn retweeted a link to the Texas Tribune article along with its headline and no comment whatsoever. One would assume that of Cornyn’s 200K+ followers, at least a few of them would be his supporters, but judging from the responses, he might as well have been calling for the extermination of all the state’s nonwhites:

And #OldWhiteMen are terrified of becoming irrelevant and losing the grip on power they’ve had for centuries. #MaybeIfYoudDoneABetterJob

here’s how we have “progressed” as a country since the 1950s: when I was a kid, racists had to hide under white hoods. nowadays they tweet from the Senate floor

And a WHITE GOP Senator is sending this out because he wants to simply share stats? Nah, this is a warning to white voters in Texas. Once again the GOP uses fears of demographic changes to animate white voters

Can’t wait until they outnumber you and vote blue en masse!

get that racist foghorn out of my ear, senator, you’re giving me noise cancer

What’s your point, Senator? Are you attempting to justify the concentration camps in your state where children are left filthy and malnourished? Or are you making a white supremacist argument that Texas is for whites only?

Dude, white people are the illegal immigrants in Texas. Recall that Spanish settlers came first? Indeed, our entire SW was swiped from Spain/Mexico.

Wearin the pointy sheet John? Maybe it’s going back to it’s [sic] true self. Before it was stolen. Let the mayocide begin!!!

I’m assuming that “mayocide” means genocide of whites, seeing as how “mayo” has gained traction as a racial slur against whites due to their reputed fondness for mayonnaise.

Sighing deeply, I will now take my butcher’s cleaver and chop through all the nonsense surrounding this “stolen land” trope.

Just like many black Americans who embrace Islam are obstinately ignorant of history because the primary enslavers of black Africans were Arab Muslims rather than European Christians, those who believe that merely speaking Spanish is a blow against colonialism ignore the fact that the Americas’ primary colonists were Spaniards. They carved up North, Central, and South America long before the Anglos dared venture here.

But in the real world as recently as 1825, there were only about 3,500 humans living in all of Texas, and 3,000 of them were Mexican—about one Mexican per 90 square miles. Nine years later—as a direct result of Mexico inviting European immigrants to populate that vast, dusty wasteland, the demographics had tilted—by 1834, what is now the State of Texas housed 37,800 people, with only 7,800 of them of Mexican descent.

It’s funny what such a massive demographic shift will do. Within a dozen years after that, Anglo troops were technologically and numerically formidable enough to thump Mexican forces back beyond the Mexican border. As recently as 1940, Anglos outnumbered Hispanics in Texas by almost 7 to 1.

Back in those golden days when “Democrats were the real racists,” Texas was solidly Democratic, and it actively disenfranchised black, Hispanic, and poor white voters. In 1912, even the Socialist Party counted more Texans among its voter rolls than the Republican Party did. But as the Democrats got wackier with the social-justice virus at the end of the last century, Texas flipped back into the GOP fold to the point that the state has not elected a Democratic Senator since 1994. The last time Texas voted for a Democratic presidential candidate was when it chose Jimmy Carter in 1976.

Texas has 38 electoral votes, second only to California’s 55. And although Ted Cruz is a doughy idiot, he is nowhere near the same level of idiot as Beto O’Rourke, a spindly, ethnomasochistic Howdy Doody puppet who nearly took Cruz’s seat last year.

If Texas should “go blue,” as it likely will, America will be doomed to a string of presidents who, whether or not they’re white, will be aggressively hostile to the very idea of white people.

Democrats may not be the “real racists”—frankly, they’d be much cooler if they were—but they seem to be the only party that realizes demographics are destiny.