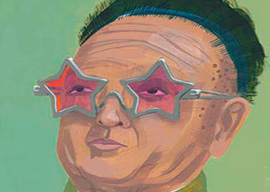 So Kim Jong-il has kicked the bucket, and I can’t say I’m happy about it.

Oh, I suppose I’m happy for the starving North Koreans. Except I’ve never known any North Koreans, so who knows if they really are starving? (I learned my lesson about trusting US government propaganda after carefully reviewing the cases of Japan, Germany, Italy, Russia, Vietnam, Afghanistan, and Iraq.) I guess it is good for democracy whenever a dictator dies, although there isn’t much difference in governments’ form anymore, and certainly not in their function. There is the probability that whoever ascends the throne will be corrupted enough that this “lucrative emerging market” will henceforth be safe to sell Coca-Cola and Levi’s Blue Jeans and we can make lots more money.

Even with such benefits, I’m sad to see the old boy go. It isn’t often one comes across such an exceptional human being.

Kimmy had a supernatural birth. No fooling. Alongside a sacred mountain, just off a secret military base, Dear Leader was born precisely where every would-be strongman ought to be—a log cabin. (Apparently they still have those in North Korea.)

On that fabled night there was not only a singularly bright star in the heavens, but a double rainbow appeared over the mountain. Moreover, suddenly the season changed from harsh winter to tender spring. Dear Leader did all that while still in swaddling clothes.

“Almost all politicians are corrupt, so it was nice to see someone who could still do it with panache.”

Having no time to waste on his path to glory, Dear Leader was walking by age three…no wait, make that three weeks according to official North Korean records! He was orating five weeks afterward, presumably to inquire why he had been so neglected during his infanthood that no one was helping him walk by his first week. Yet Dear Leader needed no “help” with anything. He single-handedly penned the destiny of his people in manifesto form at the ripe old age of two.

The next few years are a sort of blur in Kim’s life. Possibly this is because at one time he was the world’s largest single purchaser of Hennessy cognac. Reportedly Dear Leader dropped somewhere in the realm of $800,000 a year on keeping the party alive (average North Korean annual wage: approximately $1,900).

With all of that liquor to lubricate his mental faculties Dear Leader went on to invent the microwave, the radial tire, and holograms. He seems to have been working on some sort of virtual-reality pizza-delivery system, although I could be wrong.

With all of this heavy lifting a man (er, man-god) needs to relax. What better way than golf? The gentleman’s pastime! Upon learning the game, Dear Leader scored a 38 his first time out, though he was probably being modest by upping his actual score. This was on an 18-hole green and he made over a half-dozen hole-in-ones. In addition to being the best golfer of all time (he shaved 25 strokes off the previous World Record), Dear Leader was also a master equestrian, championship sprinter, and Olympic-caliber swimmer. So there.