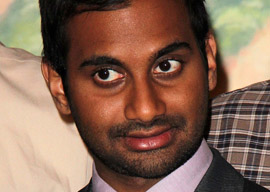 Impish comedian Aziz Ansari just penned an essay for The New York Times to complain about how scared Trump makes him and his Muslim family. Only a few short weeks after the attacks we are lamenting the incredible danger Muslims are in and worrying about how a candidate’s idea may affect people if it becomes law and is then put into a time machine and sent back to when they immigrated here. How’s that for Islamophobiaphobia? His parents come from India where Muslims slaughtered millions of Hindus despite being rewarded their own country. Many fled to America where they quickly became the most successful people in the nation. With a median income of $101,591, they are above Taiwanese, Filipino, Japanese, Chinese, Lebanese, and finally white Americans, who come in at a mere 16th place after Nigerian-Americans. Hasan Minhaj is another Indian Muslim who keeps getting affirmative-action handouts because we feel so terrible for his people. We are so scared of being racist we are refusing to acknowledge they are kicking our asses. 60 Minutes just did a feature on corruption on Wall Street and didn”t even notice that every single person in their story was Indian (or East Asian). Sorry, but you can”t waltz into a country, dominate them financially, and then complain about how “dangerous” it is. As Coulter points out when confronting wealthy Mexican students, blacks have a history that includes slavery. You just got here. You can”t indulge in the American dream while whining about how scary it is. That’s the textbook definition of privilege.

“We are so scared of being racist we are refusing to acknowledge they are kicking our asses.”

Aziz dragged out all the emotional tropes that pass for facts these days: Only a tiny minority of Muslims are terrorists. Moderate Muslims don”t tolerate it. There were no Muslim celebrations on 9/11, etc., etc. Why is it every time a bad Muslim murders people, we start worrying about good Muslims” feelings? Shapiro and Crowder already did a great job of refuting the extremist-minority myth. When calculating those numbers, you discover that an alarming number of “moderates” think “suicide bombing is sometimes or often justified.” With young American Muslims, it’s one in four. On CNN’s Why They Hate Us Saturday night, I saw Fareed Zakaria argue that animosity from extremist Islam comes from the fact that we don”t assume our Bangladeshi cabdriver is a terrorist even though he’s Muslim. Actually, Fareed, their hatred comes from the part of the Koran that explicitly says, “Hate Us.” I have spoken to cops who saw Muslims celebrating during 9/11 (with my own eyes I saw Puerto Ricans screaming, “Bomb that shit, nigga” as the towers fell, but that’s another story). Jesse Hughes told me he saw Muslims dancing in the street during the Bataclan shootings. Are we really still trying to pretend a wildly disproportionate number of Muslims don’t tolerate jihad?

Ansari goes on to discuss all the horrible mass shootings we”ve had recently and points out how white the shooters are, arguing we should be just as wary of whites. This is in a country that is 75% white. Nice logic. It’s the kind of reasoning you can get away with when emotional voters dominate elections. I”m reminded of proud spinster Rebecca Traister on Bill Maher bragging that single women were responsible for getting Obama into office. Liberals love focusing on mass shootings because the perpetrators are white males, but the numbers behind this illusion don”t even come close to backing it up. As John Lott recently discovered, France suffered more casualties from Muslims in one year than America has from all mass shootings over Obama’s entire presidency (532 to 396). We”ve had an average of 50 casualties a year from mass shootings. It’s hard to find something else with numbers that low. Texting while driving kills about 1,000 a year. A surprising number of fatal dangers seem to hover around 30″40,000. Prostate cancer, breast cancer, and gang-related shootings are all in that zone. Unfortunately for the narrative, gang shootings are black-on-black crime and they”re done with illegal handguns. Here in New York, I”d go straight to jail if I brought even my musket into the city, but we”re still at a murder a day. So politicians sit on the House floor like spoiled brats and pretend automatic-weapons bans will save lives even though we tried that and they didn”t. It doesn”t make any sense but it looks good and that’s all a virtue signal requires.