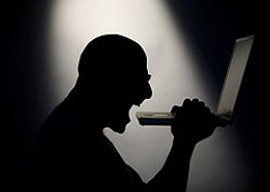 Eric Schmidt has seen the future, and he’s been kind enough to share it with us. In a recent interview with the Telegraph, the Google boss gets all dewy-eyed and breathless over the search engine’s future. “I can only describe this now as a “wow” moment,” he says, “the beginning of the real revolution in information.”

Most of us think Google was made merely for finding cheap tickets, recipes, and pictures of girls in lingerie. But according to Schmidt, the thing’s only in its pupal stage now, and when it bites its way out of its chrysalis it will know where you are, everywhere you”ve been, everything you like, and what you were supposed to be doing this morning. It will offer personalized suggestions for you on any subject you require. It will be (“with your permission,” Schmidt suavely adds) a kind of omniscient “personal assistant.”

Schmidt is smarter than we are, and he is right. Imagine unlimited broadband in the air we breathe, GPS technology, social media, the much-heralded computing cloud, Google’s gigantic servers, and many other baubles we haven”t yet dreamed of, all wrapped up in a colorful velveteen presentation case with your name on it. In a couple of decades or so, you”ll be getting one for Christmas.

There’s no reason to worry about computers taking over; the division of labor is obvious: “… the stupid stuff that we have to do, like remembering things, they can do, and the things that we are really good at”like judgment”they don”t really need to do.” The new gadget will be the ultimate household convenience, the greatest thing since the rotary-agitator washing machine.

“If we are lucky, it will not be designed by Disney, and if we are very, very lucky it will not talk to the police without a warrant.”

Even Schmidt can”t know what the thing will look like when it’s ready. A tablet, like the iPad?  Primitive”that technology’s already a year old. Perhaps it will be all contained in your phone, or in an emerald bracelet, or implanted in your brain’s frontal lobe. My sources say it will be a kind of demon, a small, faint, fairy hologram in lovely translucent Chinese colors hovering on the edge of your field of vision and whispering personalized suggestions in your choice of over sixty different voices. If we are lucky, it will not be designed by Disney, and if we are very, very lucky it will not talk to the police without a warrant.

If my wife’s reading this, wait “til they go down in price, and then I”ll be happy with the standard model. No sense paying extra for the Virtual Video screens or the Smell-O-Vision.

I want one. But I have doubts that the gadget will be as much of a boon to mankind as Schmidt thinks. Brilliant inventors have appeared before with innovations they claimed would make life perfect. The great Egyptian god Thoth comes to mind, the inventor of written language in the long-ago Dreamtime. Socrates tells his story in Plato’s Phaedrus.

The Greeks associated the ibis-headed Thoth with their Hermes, for he was an extremely clever boy. Besides writing, he invented arithmetic and geometry, astronomy and surveying, medicine and many other good things. He brought his inventions to King Thamus at Thebes as a gift to the Egyptian people. Though grateful, the king surprisingly had his doubts about the letters: