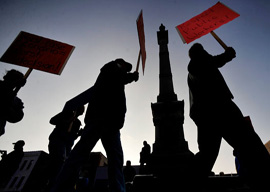 Watching events unspool in the Wisconsin State Capitol over the past few days, one would think the world is ending. In a very specific sense, it is”or at least I hope so.

It started when the state’s new Republican Governor Scott Walker placed a bill before the legislature that would curtail certain benefits and rights for most state employees. If it had been voted upon, the new Republican majority would have easily passed it. Instead of voting, the state’s 14 Democratic senators fled Wisconsin and hid. As if they were the subjects of bloody repression rather than lavishly paid government workers shirking responsibility, these senators are now being referred to by supporters as the “Wisconsin 14.”

What unraveled after the senators fled was a predictable leftist mishmash of empty slogans, hyperbole, and outright misinformation. Enabled by physicians handing out sick notes like candy, forty percent of Madison’s teachers called in “sick” and marched toward the Capitol Building. Downtown Madison became an open-air Wah-Wah Festival peopled with what the mainstream media would normally refer to as an “overwhelmingly white” crowd barking and screaming and chanting about how the new “fascist” governor was taking “extreme” and “draconian” measures to “bash,” “attack,” “assault,” “destroy,” and “strip” them of their basic human rights. He was accused of launching a “blitzkrieg attack” against workers and was likened to Hitler again and again and again and again. Chucking aside the sort of civility they demand of their ideological opponents, they depicted the governor in crosshairs and being lynched.

Jesse Jackson took a reprieve from spitting in white people’s food and calling Jews “Hymies” to deliver a speech in front of 40,000 people who politely pretended they could decipher his diction. He told the crowd that they were experiencing “a Martin Luther King moment…a Gandhi moment” and neglected to remind them he”d lied about cradling MLK in his arms as he died.

Millionaire Michael Moore Tweeted: “Madison is the new Cairo! Wisconsin teachers, nurses, firefighters “ shut the state down! All of working America is with u!” Basking in a giddy crowd’s insane power, many others also strained against all logic and reason to compare their “struggle” to that of Egyptian peasants who live on $2 a day. Many likened the governor to deposed Egyptian dictator Hosni Mubarak, including a teacher who should at least know how to spell his name correctly.

“For these workers to groan about their condition is roughly as rude as walking into a roomful of cancer patients and whining that you stubbed your toe.”

The leftist blogosphere was quick to allege that the billionaire Koch brothers had “bought” the governor’s election by contributing slightly over $40,000 to Walker’s campaign. They weren”t so quick to note that Wisconsin’s government unions and employees had spent over $1 million”all of it derived from taxpayers”in their failed attempt to try and buy the election. They whined about how Governor Walker was “killing democracy” and ignoring “the people,” but they ignored that he was elected by a majority of voters, most of whom would have been fired for lying about being sick to take off a few days and protest. They repeatedly pointed out that unions were what gave American workers the 40-hour work week and paid overtime, but they didn”t mention that such rights are now codified into law and no longer require unions to enforce them.

So what exactly had Walker proposed that had people stomping hysterically around downtown Madison as if the Ludlow Massacre had just occurred? In order to put a dent in a proposed $3.6-billion budget deficit”which smirking TV she-male Rachel Maddow had falsely reported as a looming budget surplus”the mercilessly brutal despot proposed that government workers contribute 5.8% toward their pension plans and 12.6% toward their healthcare. He also proposed confining their collective-bargaining rights to wages rather than benefits.

Yes. That’s it. That’s all it took to have them wailing like infants.