Science Fiction for the Fourth Generation 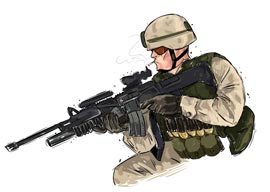 Here’s a brilliant idea for an anthology: collect essays about the changing face of war and war technology, then alternate them with short stories and novel excerpts from the cutting edge of military-focused sci-fi and fantasy.

Riding the Red Horse, edited by fantasy star Vox Day and Army Ranger vet Tom Kratman for Castalia House, is a tailor-made compromise for those time-pressed souls who find the consumption of unalloyed fiction to be too useless a practice in which to indulge. It’s also a treat for sci-fi readers who retain an interest in the world around them”and the two groups” overlap is large enough to make it a very good idea indeed.

Every tale or essay is fronted by an editor’s introduction, placed conveniently before each piece rather than in some tedious index or intro; they perk up the reader’s ears for the key factual and speculative themes of the collection.

Essays are fully half the mix, with the fiction serving as not only pleasure reading but as exercises in imagining how the technological and population changes the essayists describe might play out in the future. The tone is set early on by William S. Lind’s discussion of the four generations of modern war strategy, in “Understanding 4th Generation War.”

Lind’s unsettling conclusion is that the U.S. military is stuck in the second-generation mindset used by the French in World War I, while our adversaries”particularly those who aren”t based in a state, i.e. the jihad”have moved on to an updated version of pre-nation-state warfare, where neither the battlefield nor the combatants are clearly defined. Lind writes:

We have no magic solutions to offer, only some thoughts. We recognized from the outset that the whole task might be hopeless; state militaries might not be able to come to grips with Fourth Generation enemies no matter what they do. …

“Wherever people go, conflict seems to follow, and one always prefers to be on the winning side”so we might as well be ready for the physics problems we”ll encounter if the conflicts move into outer space.”

The fact that no state military has recently succeeded in defeating a nonstate enemy reminds us that Clio, the patron goddess of history, has a sense of humor; she teaches us that not all problems have solutions.

His essay is preceded by a dramatic fictional illustration of the unpredictability of the near future of war, albeit a state-based one: Eric S. Raymond’s “Sucker Punch,” a near-future military tale in which an American attempt to stop a Chinese invasion of Taiwan is rendered both impossible and unnecessary by the gruesome new weapons both sides have in store for each other.

The American pilots” disorientation is so stark as to be almost darkly humorous:

Blazer: “Cool off. We’re stealthed, and radar’s clear. They”ve got nothing in the air that can hit us at angels twenty.”

Later in the book, editor Kratman’s own, titular essay balances Lind’s doomsaying with a primer on the timeless principles of war that reminds us there’s nothing new under the sun. The essays range from Ken Burnside’s brilliant “The Hot Equations: Thermodynamics and Military SF””a love-slap in which the author details precisely how most sci-fi, even that of legends like Heinlein, brushes off the inconveniences of physical reality”to James F. Dunnigan’s insightful recent history of Chinese military aggression.

Spoiler: Dunnigan mentions collective revenge fantasies, although the instability of North Korea isn”t helping anyone. But whatever the current ideology, nations don”t ever seem able to budge the riverbed of their own history; Dunningan writes:

To thoughtful Chinese their current government is simply another imperial dynasty pretending to be something new and different. But it’s the same old collection of wealthy, corrupt, and inept aristocrats doing whatever it takes to hang onto their wealth and power.

Here as elsewhere in the collection, various honest observations are held together by a sense of fatalism: just like Chinese dynasties, war may change its face, but it doesn”t seem to be going anywhere. Wherever people go, conflict seems to follow, and one always prefers to be on the winning side”so we might as well be ready for the physics problems we”ll encounter if the conflicts move into outer space.

Such fatalism extends to Harry Kitchener’s demystification of spy fiction, “The Limits of Intelligence: Why It’s Nowhere Near as Important as the Spooks Would Have You Think.” Kitchener explains that a mountain of data doesn”t necessarily mean we know what’s going to hit us:

(T)he average modern nation has intelligence coming out of its ears…. And therein lies the rub…. Assuming that the old truism that “90 percent of everything is dreck” applies … you can do word searches, or even quite complex Bayesian natural language analysis, on large volumes of intercept data, but one runs the risk of pulling out too many false positives, which is not particularly helpful, or worse, discarding the one genuinely relevant thing.

Thus we”re stuck with plain old humans in the loop.

Just like the United States” mighty (but strategically backward) military heft, any feeling of security engendered by letting the NSA be as invasive as they please is illusory. Kitchener’s essay reflects back at the short story immediately preceding it””Tell It to the Dead,” one of Vox Day’s contributions, with Steve Rzasa, in which a lieutenant’s overconfident in-combat decision causes a security breach that lets a cyborg screw up the Earthers” communication and trigger a friendly-fire meltdown.