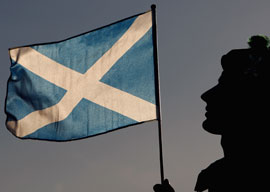 In just under 200 days, Scottish voters will face a referendum on whether or not to leave the United Kingdom. The milestone was marked by ongoing arguments about whether an independent Scotland would be able to join the European Union as well as a currency union with England. In both cases the independence faction’s leaders insist that both options are viable and would happen, despite open assurances to the contrary from those on whom the decision would actually rest.

In the currency union’s case, all three main political parties” leaders have insisted that there will be no such option. Given the near-catastrophic difficulties caused by membership of the euro among much of Europe, one can readily understand their position and believe that it is in no way a bluff. Scottish Nationalist Party leader Alex Salmond and his allies claim that an absence of such a union would cost England £500 million a year. Possibly. But that is a pretty trifling sum for a $2.3-trillion economy, and it would be nothing compared to the risks of two unequal economies with separate fiscal policies being forcibly shackled together. And as Simon Walker, director general of the Institute of Directors, asked: “[I]f an independent Scotland did not have control of its monetary policy, it would raise the question, is that independence?”

With regard to European Union membership, an ideological, rather than a practical, obstacle blocks the separatists” dreams. Spain, also a member state, is similarly faced by strong calls for Catalan independence. Intent on deterring any such move, Spanish politicians discourage any other such processes and have given clear indications that they will veto any applications for membership from secessionist states. It is in effect doing so for Kosovo, and there seems little reason, despite the SNP’s claims, to believe it would do anything else for Scotland. Even the European Commission’s president, JosÃ© Manuel Barroso (who is Portuguese in origin), cited Spain in noting that it would be “very difficult, if not impossible” for Scotland to remain an EU member.

“Prior to the Union, Scotland didn”t have a great deal in its story of which to be proud.”

But despite two of the main planks of the nationalists” argument lying in tatters around them, recent polls have shown a spike in favor of independence, albeit still a minority. Since before the campaign started, there has been a consistently wide gap of roughly twenty points in favor of the Union. In the immediate aftermath of the latest spat, that gap closed to a little over ten, with indications that many believe Mr. Salmond’s claims that his opponents were simply bluffing and bullying. Therein lies one of the Union supporters” main problems.

The nationalist camp has stolidly refused to acknowledge or accept any degree of opposition to its claims, all while adopting the old opposition trick of promising “jam tomorrow” even in the absence of any visible supply. They know that when they are in office, they can blame the previous administration for the sudden and oh-so-shocking discovery that the larder is bare. This works particularly well at the moment because of the almost complete skepticism about politicians” integrity. The irony is that when someone in a mob shouts “Thief!” very few people bother to consider the morals of the person doing the shouting. As illusionists know, the instinctive reaction is to look at where the finger points and away from the pointer.

It works particularly well in Scotland, because the argument is not about mundane economic and social minutiae. It is all about emotion. To a certain part of the Scottish population, this has as much to do with reality as Mel Gibson wearing a kilt with a blue-painted face shouting “Freedom!” Never mind the truth that William Wallace would no more have worn a kilt than a toga, that he had more in common culturally and genetically with the English and Scots he was fighting than he did with the Highlanders who wore them, and that nobody had painted their faces with woad for damn near a thousand years.

Since the early Middle Ages, Scottish history has been steeped in romanticism. It has been a moral shield that has protected it from the knowledge that through no fault of their own, the Scots have never been a match on the national scale for their neighbors. It’s nothing about their personal stature. It is England”not the Englishman”that is simply much, much bigger. It’s been that way since the unification of the Anglo-Saxon heptarchy in the ninth and tenth centuries and was first demonstrated by Athelstan in the 930s. Scotland’s greatest achievement prior to the Union was its extraordinarily persistent success in maintaining its independence. In a way, that was the emotional cost of the Union that is still being paid. When Scottish Chancellor Lord Seafield signed the Act of Union, he uttered the memorable words, “Now there’s ane end of an auld sang.” Even though he was one of the leading Unionists, his words” romance and poignancy are eloquent.