Scrums Along the Potomac 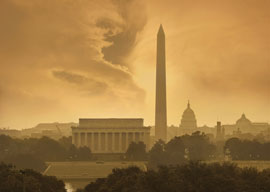 The most recent moment of defining culture for the DC metropolis wasn”t the finagling over the nation’s debt ceiling or the tug of war over restoring funding to military pensions. It was the premiere of a television show. The Netflix drama House of Cards has been hyped up specifically to Beltway residents.

It’s a strange paradox. House of Cards is the embodiment of Washington’s seedy underbelly. The characters are ruthlessly conniving. Sexual deviance is everywhere. Payoffs for votes are normal. Personal lives are put in jeopardy. The threat of ruin is always in play.

And yet in the run-up to the show’s second season launch, it’s all “This Town” could talk about. Social media was abuzz with anticipation. Office workers speculated on the transgressions antihero Francis Underwood”played brilliantly by Kevin Spacey”would commit on his way to the top. Even the sitting President of the United States said he was excited for the season opener. It’s as if everyone in Washington knows that Spacey’s role is not all that fictional, that his spirit lurks in the city and is responsible for all those quiet dealings in hallways and restaurants.

“The lifestyle of freewheeling opulence is the lifeblood of Beltway culture.”

Subway stations in the District are plastered in advertisements for the show. Finding significance in a television program is usually a misguided task. But this was different. All the anticipation pointed to a larger context. These subway backdrops represented more than a cheap marketing ploy. They brought commuters together in a kind of shared appreciation. It was in witnessing one of these posters beneath the swampy ground of the nation’s capital that I caught a glimpse of what conservative writer Ross Douthat calls the “script.”

It’s tough to find roots anywhere along the Potomac. This is especially true for Millennials (including myself) who have flocked to the city in recent years because of job opportunities not found elsewhere in the country.

It’s an easy phenomenon to observe, specifically when new batches of interns make their way to the city at the beginning of each college semester. The influx of young blood arrives with the same story: Local commerce gets a boost, while connections to a firmly rooted culture are weakened.

This merry-go-round of visitors and denizens is only the effect, not the cause, of Washington’s attractiveness. After all, ants don’t congregate around breadcrumbs for no reason. DC has always been a magnet for go-getters. As the federal government has grown, it only makes sense that the surrounding area grows with it. In 2012, Andy Ferguson documented this trend in a piece for TIME magazine titled “Bubble on the Potomac.” Due to a rising affluence (out of the top eleven richest counties in America, six surround the District), Ferguson calls Washington a “world apart from the country it governs.” The claim is on point. It’s nearly impossible to keep small-town sentimentality when you live in a place awash in tax dollars.