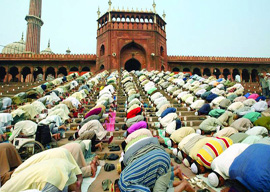 For the 30 years since The McLaughlin Group began to run on network television, the Christmas and New Year’s shows have been devoted to the conferring of annual awards.

The first award on the Christmas show is “Biggest Winner.”

This year, clearly, one of the world’s big winner was—Islam.

For this was the year when what Catholic apologist Hilaire Belloc predicted in 1938 would be the “second period of Islamic power” became manifest to all mankind.

From Morocco to Pakistan, a great awakening is occurring. And perhaps the most dramatic example of Islam rising again came in Egypt, with the fall of the 60-year-old military dictatorship.

With the ouster of Hosni Mubarak after weeks of demonstrations in Tahrir Square, the West hailed the coming of democracy.

“In international test scores of high school students in reading, math and science, not one Muslim nation places in the top 30.”

But democracy delivered a rude shock. In the first round of voting, over 60 percent of all Egyptians cast their ballots for either the Muslim Brotherhood or the radical Islamist Nour Party of the Salafis. In the second round last week, 75 percent voted Islamist.

In Tunis and Tripoli, too, the overthrow of autocrats revealed a silent majority sympathetic to Islamism.

Recep Erdogan, the most important Turkish ruler since Kemal Ataturk, was a candidate for TIME‘s Man of the Year as he turned his nation’s back on a century of secularism and embraced a form of Islamism.

Muslim Uighurs seek to rip China’s largest province away from Beijing and establish an East Turkestan. Muslims in the North Caucasus seek to strip Dagestan and Ingushetia out of Russia. In Iraq and Afghanistan, Americans are in retreat and Islamists are celebrating our eviction.

While all the world has heard of the atrocity against Muslims in Srebrenica, that world ignores the desecration and destruction of Orthodox churches and cathedrals in Kosovo and the ethnic cleansing of Serbs by the Muslim Albanians that President Clinton brought to power.

Worldwide, the Muslim population has surpassed Catholicism as the world’s largest religion, with 48 members of the U.N. General Assembly now boasting a Muslim plurality or majority.