Sectionalism, Then and Now 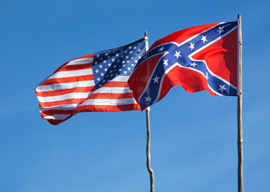 Some years ago, before I attained wisdom, I got a bit closer than I should have to some problems a friend was having with his wife. After one sensational dust-up that left my pal literally crying in his beer, I urged him to tell me what the casus belli was. Not a very articulate guy, he struggled to explain: “This row we had…it wasn’t really about what it was about. Know what I mean?”

I think we all know. Rather a lot of human conflict, with all its yelling and breaking, its blood and tears, isn’t about what it’s about.
The current brouhaha over gun control strikes me that way. Listening to the opinionators, I started to think I could do a near-simultaneous translation”a translation, I mean, from the surface chatter about constitutional rights, kid safety, self-defense, and 30-round magazines (not “clips,” for crying out loud) to the underlying ideas in the speakers’ heads. Something like:

Blue guy: “Why does anyone need a 30-round magazine? What use is that, except to commit mayhem?”

[Translation: You dumb ignorant unwashed cracker, you can’t wait to let loose on some harmless crowd of African Americans, can you? Get back to your cabin and jar of corn liquor and relatives with six fingers. You shouldn’t be playing any part in the life of the nation, with your crazy religion and your reactionary social ideas.]

Red guy: “The Second Amendment is the people’s safeguard against tyranny.”

[Translation: You think I don’t know what’ll happen to me and mine if you sissified, overeducated elite hypocrites ever get total power over us? Leave us alone, dammit!]

I’m not being loftily impartial here. I belong to one of those sections. (Take a guess.) I’m just making the point that what this is really about is good old American sectionalism“two big groups of white people who can’t stand the sight of each other. We are eternally re-fighting the Civil War.

(Yes, white people. Blacks are hors de combat here, as they mostly were in the Civil War, neither side of which liked or trusted them. Sherman would not let colored troops march armed in the Grand Parade. Some black pioneer units marched with picks and shovels, but they were regarded as comic relief by the spectators and newspapers. Nobody cares what the generality of blacks think, no more now than in 1865. This war, like that one, is an intra-white affair.)

Gary Gallagher, in his excellent lecture series on the Civil War, mulls the question of whether there was a civilizational difference between antebellum North and South”whether their temper and social arrangements were so different as to make them already, in effect, two nations:

Most Americans in my view by the mid-1850s at the latest believed that there were major differences….Many in the North looked South and saw a section that they believed was holding the nation back. They saw a land of lazy, cruel, violent people who did not subscribe to the ideas that would make the United States great….Many white Southerners looked to the North as a region of cold, grasping people who cared little about family and subordinated everything to the process of making money. Perceptions on each side had reached a point by the mid-1850s that scarcely allowed many Northerners and Southerners to view the other section in anything like sympathetic or even realistic terms. Each side expected the worst from the other.