See You at the Dojo 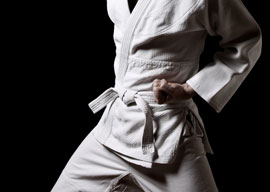 THUN, SWITZERLAND—”Mokuso!” All 200 of us who are already on our knees and sitting on our heels in the Japanese “seiza” position remain dead silent at the command. No loud breathing, no movement whatsoever, just “mizu no kokoro,” a calm mind, like the surface of undisturbed water. “Kaimoku,” the next command, signals the end of inner contemplation, followed by “Shomen ni rei,” where we all touch our foreheads to the ground, saluting the father of karate. “Sensei ni rei” is the last command uttered by the senior karateka, who happens to be me, saluting the instructors. Then it’s time for “tsuki no kokoro,” a mind like the moon, which refers to the need to be constantly aware of the opponent’s movements, just as moonlight shines equally on everything within its range.

“In my 48 years of practicing karate I don’t think I’ve had a more satisfying week.”

In my 48 years of practicing karate I don’t think I’ve had a more satisfying week. There were none of these freaks covered in tattoos, muscle-bound, hairless-pated hominids attuned to their inner ape that pass as tough guys on TV and so-called ultimate fighting. Just some very strong and dedicated amateur and professional karatekas from all over the world—some from as far away as Japan, Canada, and California—all here in Switzerland to live the Steve Ubl experience, one I highly recommend for aspiring martial artists no matter how high their grade. (I am a seventh-dan black belt and feel like a novice next to him.) The other is Richard Amos, my teacher, who is based in New York and was a member of the British karate team back in 1983 when our paths crossed during the world championships in Cairo. I was captain of the Greek team and lost the fifth and deciding match against Britain, to get into the quarters, making my decision to retire after that an easy one.

Studying and training under Richard these last fifteen years has been one of my life’s great pleasures. About ten years ago he told me about Steve Ubl. Like many great karate practitioners, Steve and Richard studied in Japan, as did I, but simply studying the art in Japan doesn’t always mean one learns. The Japanese are known to do but not teach. The culture is one of osmosis. Do as I do is the Japanese way. Not many get it. Steve and Richard have, but they had the inquisitive nature and intelligence to realize that correct form and posture, not simple brute strength, conferred the perfect technique. Poor mechanics are the bane of martial artists, and that’s where Steve excels. He has studied the psoas, the massive cross between the tendons and muscle attached to the lower back that threads through the pelvis and the hips. Thus when he delivers a front kick with speed and power, it is the strongest and most devastating I have seen in my lifetime. It’s scary to contemplate being on the receiving end.