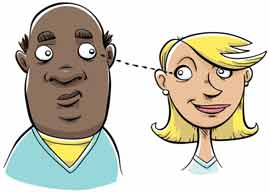 Of all the subjects of academic study, psychology is probably the most useless, or at least the most useless by comparison with its pretensions to use. In a century and a half, it has not told us anything of undisputed value. It is subject to absurd fashions, and its published experiments, even when they are interesting, are often either not reproducible or their relevance to life is unclear. The overall cultural effect of psychology is negative, insofar as it tends to alienate people from their own direct experience and causes them to speak of themselves as if they were mere objects. They then attribute their actions to forces or things other than their own decisions, one of the popular explanatory forces or things at the moment being neurotransmitters. This is a boon to drug companies but not necessarily to the population as a whole.

An article in Scientific American describes research into the length of eye contact that we humans find pleasant or supportable. This is an interesting subject, on which we all have instinctive opinions.

Non”eye contact is observable in many social contexts. I sometimes attend my local town council meetings and there was one counselor (not reelected) of exceptional untrustworthiness who, when speaking, would roll his eyes around the home room, taking in every nook and cranny of the ceiling, in an attempt”a successful attempt”never to look anyone in the eye. This gave the powerful impression to onlookers, I suspect correctly, that he never spoke except in his own convoluted and byzantine interest.

On the other hand, looking someone in the eye for too long is often taken as aggressive or intimidating. Fights in bars frequently result from too-prolonged eye contact, which is often interpreted, especially in a macho world, as a challenge. Women, too, are becoming more macho, at least in England: I remember one of my first patients at the hospital in which I spent the last fifteen years of my career was an aggressive young woman who described her behavior in the pub the night before she consulted me in words that I did not at first understand: “She was blazing me so I glassed her.”

This meant that a female in the pub was staring into her eyes with an intensity and length that she took to be menacing, or as a challenge that it would have been feeble to refuse, so she broke a glass and pushed the broken jagged end of it into her face. I have known murders caused by too-prolonged eye contact.

Another type of prolonged eye contact is used by the confidence trickster, the political chancer, or the religious fraud, who attempts thereby to communicate a burning sincerity or a penetrating insight into his interlocutor’s soul. A lot of people must fall for it because otherwise the swindlers of various denominations wouldn”t employ it. The swindler’s prolonged gaze is intended to convey also that its recipient is the only person in the world who matters to him. It is a crude form of flattery.

Yet another use of prolonged eye contact is that to induce guilt in an interlocutor. The question “Do you really think you should have done that?” accompanied by soulful and prolonged eye contact is a powerful tool for making someone feel guilty even if he has done nothing wrong. This is useful because a person who feels guilty is more easily susceptible to manipulation.

Then, of course, there is the furtive eye contact. The person who employs it is trying to obtain an insight into the other person’s thoughts or feelings without being noticed, not so that he understands that person in a sympathetic way to that person’s benefit, but so that he can take advantage of his knowledge.