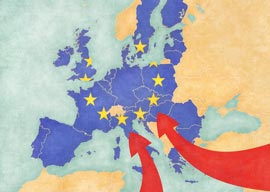 My Syrian Christian friends”refugees themselves in Bucharest, though affluent refugees”are strongly opposed to admitting Muslim asylum seekers into Europe. They have reasons.

Quite by chance, one just called me, on business. He is an intelligent man of good family. (Christians make up much of the intelligent class in Syria.) He didn”t call to talk politics, but he did anyway.

His parents are in Syria, in a place that is pretty safe, close to the Lebanese border. Law and order has not broken down, but the forces of law and order have no power. If you were to commit a murder where his parents live no one would arrest you. Yet life goes on.

He is horrified by the influx of refugees into Europe. He says it is caused by the people-smugglers dropping their prices from $10,000 to $2,000 per person. He thinks the waves of refugees, if unchecked, will lead to “civil war” in Europe.

The refugees are not poor, nor in fear of their lives, he says. They all have money to pay the smugglers; they all want to go to rich countries, not countries like Romania or even Hungary; many of them are Islamists, and some of them are ISIS supporters. He fears Muslims will gradually take over Western Europe.

Of course, he exaggerates.

“No one drowns trying to get to Singapore because Singapore accepts no asylum seekers.”

We all feel so very, very sorry for the 3-year-old Aylan Kurdi, the drowned Syrian child, the picture of whose dead, cold body, lying on the shore, has gone all round the world.

The picture moves us so much because the dead child was dressed like one of our children. Had he been dressed in Middle Eastern clothes, it wouldn”t have such a big impact.

We all feel very sorry for his grieving father, Abdullah Kurdi. He said he simply wanted to give his children a better life. He is absolutely admirable and brave and reckless”and an economic migrant, not a refugee fleeing danger. By his folly he is responsible for his sons” and wife’s deaths. He must live with this.

The family was not in Syria, but in Bodrum in Turkey, a pleasant seaside town where there is no war and where rich people whom I know choose to holiday. Mr. Kurdi worked as an odd-job man. The family had been in Turkey for three years. Their circumstances were no doubt grim, but they were in no danger, till they boarded that boat.

They were Kurds. Turkey, which has a very large Kurdish community, is a good place for Kurds, a much better place than the other countries where Kurds live: Syria, Iraq, or Iran. As Kurds their lives should have been much easier in Turkey, where millions of Kurds spoke their language and shared their culture, than had they been Arabs. They could have integrated much better into Turkey than into Europe. But for very understandable reasons Mr. Kurdi wanted to join the burgeoning Kurdish communities in Western Europe instead.

Beside the Turkish-Syrian border is Hatay Province, which includes Antakya (Antioch). Turkey stole Hatay from Syria in 1939, when Britain and France were preoccupied, and it always had many Arabs. It has huge numbers of Syrian refugees now, and it seems a good place to house Syrians, rather than in Europe.

Yet 104,460 asylum seekers arrived in Germany last month and more than 800,000 are expected this year, one percent of the population of Germany. This is part of a revolutionary change not only in Germany but also in the whole of Europe.

How many safe countries can refugees pass through before they become economic migrants? And note something else: Yes, there are women and children among the immigrants, but they are a minority. The large majority are young males. This also means that they are mostly not war refugees but economic migrants.

The Australians insist asylum seekers move on after three years. For some reason that I do not understand, in Europe asylum seekers are not given asylum for a year or two and are then asked to leave but allowed to settle permanently, which is why centuries from now Germany will always have large Arab and Kurdish minorities. This will be irrevocable.

Refugees have every reason to want to live in Europe. It is Europe’s duty to the refugees and, more important, to future generations of Europeans to stop accepting any asylum seekers from other continents. No one drowns trying to get to Singapore because Singapore accepts no asylum seekers. This is the only way the drownings will stop.

We can pay poor countries to take them for us. I wonder how many Syrians and Libyans will accept refuge in Burkina Faso. We can try the experiment and see.