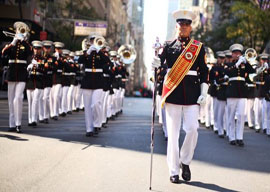 For about an hour I watched the Columbus Day Parade from the rise of Lenox Hill at 71st Street, just north of the Frick mansion on Fifth Avenue’s shady side.

The first element was a United States Marine Band. It wasn”t the “President’s Own,” who were probably busy in Washington. The unit’s name on its big bass drum was the 2nd Marine Aircraft Wing Band. They were about fifty strong, with a drum major out front and an officer on the right flank.

It makes a feller proud to be an American to see these lean Marines, including a few females, in their blue jackets, all in perfect step, their starched white trousers breaking at the exact same moment, the ranks and files as perfectly aligned as if they were die-cast metal toy soldiers. They were playing a song by that greatest Marine Band director: John Philip Sousa’s “Washington Post.” It may be the best thing ever to come from that broadsheet some call “Pravda on the Potomac.”

The Marines were followed by the Tokyo Police Band, all in white from headgear to boot led by a high muckety-muck officer with enough scrambled eggs on his saucer cap to make a nice-sized omelet. They were not as good as the Marines but were in step and pretty sharp. I thought how ironic it was that these visitors from the Land of the Rising Sun, those folks who gave us Pearl Harbor, Peleliu, Tarawa, and Iwo Jima were in such close proximity to our Marines.

Following them came the NYPD. I don”t know whether it was THE police band, but they were a Raggedy Andy group of out-of-step, overweight dirtbags, certainly as compared to the Marines or even our Oriental visitors. I don”t want to be run out of town on a rail as almost happened to Taki a few years ago when he wrote something critical about the Puerto Rican Day Parade. Mayor Giuliani threatened to deport him, unaware that Taki is a US citizen. But the police band was nazzo good. Perhaps the strac cops are otherwise engaged in protecting us from terrorists and narcotraficantes and don”t have time for this parade foolishness. Perhaps budgets are squeezed. Perhaps they were an NYPD Italian-American brotherhood band that only does this once a year. As Voltaire said, “Tout comprendre, c”est tout pardonner.”