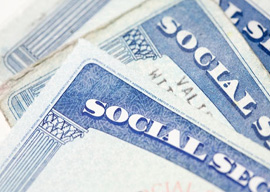 Social Security is a “Ponzi scheme for these young people,” said Gov. Rick Perry in his first debate as a presidential candidate. “The idea … that the current program is going to be there for them is a lie.”

Pressed by the moderator, Perry did not back down. He doubled down, calling Social Security a “monstrous lie to our kids.”

Is not such language provocative, Perry was asked. Retort: “Maybe it’s time to have some provocative language in this country.”

Since Barry Goldwater suggested the program be privatized and LBJ ran an ad of a Social Security card being scissored in half, the issue has been “the third rail of American politics.” Touch it—and it kills you.

Apparently, the Mitt Romney campaign thinks it is still the third rail.

Yet Perry never said he was going to abolish Social Security. He said, “We need to be focused on how we are going to change this program.”

“If Ford Motor did what the U.S. Government has done—borrowed and spent all the cash the company, its employees and workers had contributed to their pension fund, and used it for wages, salaries and expenses, leaving IOUs in the vault—the executives would go to prison.”

Karl Rove, however, piled on, as did ex-Romney aide Alex Castellanos:

“Rick Perry may have reassured the base with some very fiery rhetoric, but what he didn’t do last night was prove in any way that he could win independents or seniors or soccer moms. And … he shot an arrow into the heart of seniors. He set grandma’s hair on fire.”

Yet, on the merits, Perry has more than a small point. For the Social Security program has been relentlessly looted by a Beltway political class that has used it for decades as the piggy bank of last resort.

Social Security was originally designed in the 1930s to be a program where all workers would contribute during their years of employment into a trust fund, from which they would receive a small annual stipend to help with retirement, should they live to 65.

In 1972, when Richard Nixon proposed a 10-percent increase in Social Security benefits, plus indexation—automatic annual increases to cover inflation—the Democratic Congress raised it to 20 percent.

Fearing a congressional override if he vetoed, Nixon signed, then claimed credit for the most generous Social Security benefit increase in history, and went on to win 49 states.