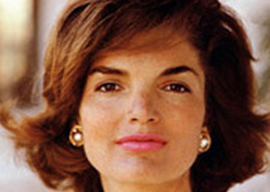 Here’s the way things stood before November 22, 1963. Jackie’s sister, Lee Radziwill, was having a flirtation with the golden Greek Aristotle Onassis. Her husband, Stas, was also having a flirtation (I choose euphemisms in reaction to modern celebrity writing’s crudeness) with Henry Ford’s eldest daughter Charlotte. When JFK was told of the situation, he asked Lee and Stas to put their future plans (Lee to marry Onassis and Stas to wed Charlotte) on hold until after the 1964 election. Both agreed to do so. Jackie flew to Greece and spent a few days with her sister on the Onassis yacht, while Stas and Charlotte canoodled innocently around The Hamptons. Then the president was assassinated and their world went topsy-turvy. Onassis decided to go after bigger fish than the president’s sister-in-law—namely, Jackie. Stas and Lee decided to stay together, as the Polish prince rightly divined that leaving his wife after the president’s death would look callous and cruel. Charlotte Ford then turned to yet another oldie, Onassis’s brother-in-law, Stavros Niarchos, got pregnant by him, and married him briefly. Lee found solace in the company of Warren Beatty and yours truly.

“The keepers of the Kennedy flame are correct to keep it alive, but so are we who happened to be around and have no axe to grind.”

Another recent book claimed Jackie had affairs with Beatty and Gianni Agnelli, principal owner of Fiat autos. Nothing could be further from the truth. At the time I was one of Agnelli’s closest friends, and although he and Jackie were social friends, neither found the other the least attractive.

Other points in the new oral history that stuck were Jackie’s remarks about the great Charles de Gaulle, calling him “that egomaniac.” De Gaulle had Jackie’s number from the start. Just after JFK’s funeral he told his Minister of Cultural Affairs Andre Malraux that Jackie would end up on an oilman’s yacht in two to three years’ time. Onassis owned tankers, de Gaulle’s secret services had spied on her during her Greek sojourn, and le Grand Charles was off only by a year. She married Onassis four years after JFK was buried.

Jackie suspected Clare Boothe Luce of having lesbian tendencies, but I beg to differ. She also called President Abboud of the Sudan one of the smartest leaders she had ever met. Again, I beg to differ. I knew the general quite well, as I visited him regularly in the presidential palace in Khartoum and dispensed gifts in the form of British pounds from my father, who owned Africa’s largest textile plant and employed more than 5,000 Sudanese workers. Abboud was a nice man but extremely limited intellectually. Jackie loved him because following a state visit to Washington he had showered her with expensive gifts.

All this was long ago, and the only reason I’m writing this for Taki’s Mag readers is to set the record straight. It is the only compensation for old age. Once an eyewitness, always an eyewitness. The keepers of the Kennedy flame are correct to keep it alive, but so are we who happened to be around and have no axe to grind.