Settle for Less, You White Bastards! 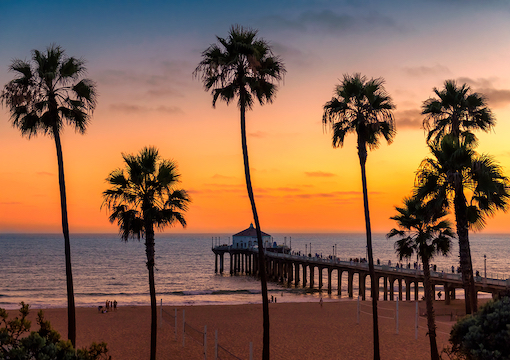 It was October 2003 and L.A. Times columnist Peter King was angry. Mad as hell, in fact, about white Californians and their expectations of happiness.

Arnold Schwarzenegger had just scored a landslide gubernatorial victory as an anti-illegal-immigration candidate. Yes, I know it’s hard to believe that weak-kneed girly-man Ahnold was once seen as an anti-immigration extremist. But that’s how he was portrayed, and the Times had spent the preelection months warning readers that a Schwarzenegger victory would lead to mass roundups and death camps for brown people.

Peter King couldn’t contain his hostility toward the voters who’d just initiated the Fourth Reich, those “sun-drenched men and women in short sleeves, roaring approval as a Hollywood icon recites a line from an old movie: ‘We’re mad as hell, and we aren’t going to take it anymore.’” How dare we be mad, frowned King, at the “new law that permits undocumented field hands, who make up the majority of the state’s farm labor force, to obtain driver’s licenses”:

Now as always, the anger in California politics appears to be rooted, more than anything else, in the unexplored, nostalgic notion that the state was a far better place to live only a few years before—before “they” swarmed over the border.

White Californians—described by King as “natives”—want to preserve the state as an Eden. Therefore, they treat the “new Californians”—described by King as “illegal nannies and drywall hangers”—as a threat. The natives fear that their “Eden has been squandered” thanks to “shifting demographics.” But such fears are unfounded, King counseled, the product of an irrational hatred of “the other” and an unrealistic expectation of “paradise.”

In plain English, the white natives are riled because their expectations are too high. Stop demanding Eden, and you’ll have no reason to fear those new, illegal “others.”

Peter King’s Oct. 8, 2003, column (it’s not available online, so here’s a scan) is a fascinating piece of history. Leftists understood, better than most Schwarzenegger voters, the import of that victory. It was the last gasp of a people with expectations of living a good life in an Edenic state. Those expectations had fueled California’s populist referendums of the ’90s. We’d overwhelmingly passed the most restrictive anti-illegal-immigration ballot measure in the nation. We outlawed affirmative action in state colleges and universities, we ended bilingual education in favor of English immersion, we passed a “three strikes” law that put inveterate criminals away for 25-to-life even if their third felony wasn’t murder (because the idea was to stop them before they got that far), and—perhaps best of all—we defeated the Hollywood left’s “Big Green” global-warming initiative, which would have eliminated 100,000 jobs, cut state economic growth by 2%, and cost upwards of $12 billion.

By the time Schwarzenegger swept into office on star power and a promise to crack down on illegal immigration, people like King had had enough. “Natives” like me wouldn’t let go of our expectations. We wanted California, not “Mexico North.” We wanted academic institutions that based admissions on grades and test scores, not “victim points.” We wanted to be able to read store signs, menus, and billboards in our own language. We wanted to be able to walk down the street without fearing serial predators operating on their fifth or sixth felony, and we valued jobs and economic growth over apocalyptic global-warming hallucinations.

We should be grateful to Peter King for saying what was likely on the mind of every leftist who was doing a slow burn while watching the natives score that one final victory in the fight to preserve their quality of life: How dare those bastards expect to live in paradise.

“We haven’t just defiled paradise; we’ve turned it into a Taco Bell restroom.”

If America is to be properly Third Worlded, certain people must be broken. Whites who dream of paradise are the wrong kind of “dreamers.” The expectations lambasted by King in ’03 must be dashed and abandoned. Once sights are lowered, worsened conditions can be accepted.

In California, mission accomplished! As I wrote in July, we now have a governor who gives speeches aimed solely at the state’s illegals, gleefully bragging about how great it is that the California of the 1990s has been killed off. In sixteen years, we’ve gone from a governor promising to control the border to one so disdainful of the “sun-drenched natives” that he tailors his speeches to foreign nationals while gloating over the disenfranchisement of those who tried to preserve the Eden of old. Thanks to “shifted demographics,” he doesn’t even have to pretend to pander to natives like me. We’re no threat anyway, because how could any Californian retain high expectations these days? We haven’t just defiled paradise; we’ve turned it into a Taco Bell restroom. We’re nationally ranked last in quality of life. We’re in the top ten worst states to retire. We’re top ten worst in student academic performance (right above D.C. and Arkansas), and twelfth worst overall school system in the U.S. We’re the worst state for working moms (even though we’re so proudly “feminist”). We’re the worst state for business, and the worst state for pollution. We have the highest taxes, and the highest poverty rate. And we’re ranked 49 out of 50 for “opportunity” (only Louisiana outsucks us).

More Americans leave California each year than move here (a net loss of almost 200,000 American residents a year). I stress Americans because even with that loss, our state population continues to grow, due to immigrants and their big ol’ pregnant mamacitas. And indeed, we are the nation’s “most diverse” state. Most diverse, worst quality of life, worst schools and test scores, worst retirement, worst for business, worst pollution, worst poverty.

Diversity is our, uh, strength? Yes, Peter King, it turns out that “the state was a far better place to live only a few years before ‘they’ swarmed over the border.”

Thanks in part to three strikes, our crime rate had leveled out…until we recently decided to roll back three strikes and pretty much redo our entire state criminal justice system with a “bad guys come first” motif. We capped our prison population (“triple murder? Gotta let him go, we’re at our limit”), we turned most theft convictions into misdemeanors, and we lowered the threshold for parole while practically eliminating increased time for enhanced sentences.

Currently, theft of anything below $950 in value results in a misdemeanor ticket like jaywalking. Literally, you can grab $900 of merchandise from a store, walk out the door, and the worst that’ll happen to you is that you’ll get a citation. As a result, as even the far-left San Francisco press was forced to concede, most theft suspects face “no pursuit and no punishment.”

Property thefts are surging, and small businesses are closing as they hemorrhage money thanks to shoplifters who know they can waltz in, grab up to $950 in merch, and walk away unmolested.

There’s more: In California, car burglary convictions can’t be won unless the prosecutor can prove that the car door was locked when the burglary occurred. A car’s window can be bashed in with a rock, but unless the owner has “evidence” that he locked the door when he left, the thief walks. I’m not making that up. As the L.A. Times admits, this has pushed car break-ins to “crisis levels.”

Funny enough, the rationale behind the “locked car door” law mirrors the left’s attitude regarding immigration: People have a right to be in your car. Your car doors are like a border, a fascistic barrier to the less fortunate. If strangers get in, they get sanctuary.

Many of those criminal justice “reforms” (I cannot stress the scare level of those quotes) were passed via referendum. In other words, we did it. Just as we voted ourselves a gas tax increase last year. The day before the new tax took effect, as I walked through a gas station adjoining my neighborhood supermarket, I observed the traffic jam of cars waiting for one last pretax fill-up, and the sour looks on the motorists as they waited in line. And I wanted to furiously bash their heads together while yelling, “You voted for this, morons! You’re upset about a tax you voted for.”

Last month, the “good” (scare quotes again) people of San Francisco elected an unashamedly communist DA who stated, and this is a direct quote, “I will not prosecute cases involving quality-of-life crimes.”

Which brings us back to Peter King’s 2003 manifesto. Everything he hated about us “sun-drenched natives” we’ve since purged from our souls. We no longer expect Eden, we no longer fear “the other,” we no longer care about “quality of life.” We’ve turned the state over to illegals, to Spanish-first, to criminals, to high taxes. We’ve been neutered, tamed, and pacified. Break into our homes and cars, crap on our sidewalks, crap on our immigration laws (California has a record 45 “sanctuary” counties), we’re cool with it now.

King accurately pinpointed what the left needs to do in order to turn this country into a Third World shithole: The dream of Eden must be eradicated. King hated what he saw in us, that desire to live well. He especially hated seeing white folks with high expectations. Because generally white folks can, if they set their mind to it, make things happen. If they expect paradise, they’ll work toward it. Keep chipping away at those expectations, and soon enough they’ll accept their diminished state. Oh, they’ll grimace, like those idiots at the gas pumps, but it’ll be the grimace of the resigned. “I don’t like it, but whaddya expect? It’s California.”

I wrote to King, now retired from the Times, to ask him if he’s happy with how things turned out, so many years after his angry op-ed. I posed this question:

These days we routinely vote ourselves tax increases, and there’s a general rejection of the immigration, Affirmative Action, bilingual education, three strikes, and Prop. 13 initiatives of decades passed. If the pursuit of those things indicated an expectation of Eden, does today’s rejection of them indicate that we’ve abandoned that expectation?

His brief and cryptic reply? “America, only more so.”

That’s the damned thing about an email…you can’t tell if the person writing it is shaking their head in sorrow, or smiling ear to ear with glee. In King’s case, I have my own guess.

“America, only more so.” Yeah, what we have here in California is coming your way, folks. In 2003 we elected a tough-talking, womanizing loudmouth celebrity who ran on a platform of immigration control. He failed, and look where we are now.

My state might be lost, but maybe, just maybe, there’s an analogy here, and a warning, for the rest of you.