Sex and Sacrilege at the Met Ball 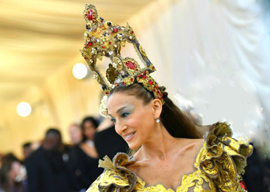 Clothes are the carriage of the soul. Like the soul, they should be well-made and un-ostentatious. No one expressed this better than Beau Brummell when he said, “It should take at least five minutes from a man entering the room to noticing he’s well-dressed.” I reached for these remembrances upon reading about this week’s so-called Met Ball. It confirmed a long-standing suspicion that “themed” dress codes—let alone the grotesque excess of “fancy dress”—are the last refuge of people who want to be looked at rather than heard. And usually with good reason. People of sensitivity can be found stalking the fringes of these grim saturnalia, having sacrificed good taste to some quiet sartorial pun. Such decency was in short supply at the Met Bell, of course. Its “Catholic” theme would be better described—to borrow from Kazantzakis—as Christ Recrucified. Such intellectual micturition was irresistible to what passes for a celebrity these days. And so we had crosses and Madonnas plastered across the plasticized bosoms of the courtesan classes. One starlet thought it wise to tempt fate by coming dressed as The Last Judgement; another had a Christmas crib constructed atop her empty cranium.

The event had its intended effect. Around the world, the opening pages of tabloids slavishly recounted Who Wore What. Offense was dutifully taken. Even the chubby-cheeked chipmunk Piers Morgan—usually such a dependable source of liberal repetition—recorded his umbrage. Yet beyond testifying to his own cradle Catholicism—and making the somewhat obvious statement that It Wouldn’t Happen To Muslims—the well-tailored rodent didn’t answer the most obvious question: Why? What forces have brought us to this pass? Is the best shop window left for Christianity its own mockery? And why did the church both condone and attend the event? Fr. James Martin SJ—surely the owner of a better class of soutane—even drew admiration for his “sexy priest” outfit.

“If students cannot choose a Halloween costume without the aid of an anti-offense flowchart, why are such protections no longer afforded to the world’s largest religion?”

If students cannot choose a Halloween costume without the aid of an anti-offense flowchart, why are such protections no longer afforded to the world’s largest religion? Underlying this is the charmingly parochial assumption that only brown people have the right to be annoyed by cultural insults and appropriations. That being the case, what about the hundreds of millions of brown Christians occupying the southern hemisphere? Drawn from the very same ethnicities pillaged by years of Colonial Oppression? How about giving them a break on this stuff? No, sir! Those who adopt the white man’s religion lose their black privilege right quick! The response to Kanye West has already shown us that brown people’s political choices are not taken seriously by white liberals. To that we may now add their religious choices. Hey, you! Get back in that nice feathery mask! And stay there!

Christians furthermore tend to internalize their grief—at most forming the odd prayer wall—rather than breaking out the small arms. Jihad is the fullest outworking of that fine New York expression “The squeaky wheel gets the oil.” After the Charlie Hebdo massacre in Paris, a few lonely voices insisted that other publications, indeed every publication, should step forward with the secular cry “I am Spartacus!” and depict Pro Mo in whatever manner they see fit. They didn’t: and so Europe was backed into observing de facto Islamic blasphemy laws. The equating of free speech with Islamophobia is now so entrenched that a huge freedom rally in London over the weekend was covered—when it was covered at all—as “far right.” Voltaire would be proud!

Just as the powers-that-be ring-fence the culture shock of Islam, they open up Christianity to the wardrobe witticism of the celebrity class. But “yadder yadder, double standards” isn’t enough without asking: Wherefore these double standards? I promise not to mention Herbert Marcuse again for—oh, I don’t know—another week, but the asymmetric cultural doctrine of Repressive Tolerance is essential reading to understand our modern hall of mirrors, in which good becomes bad and vice versa.

The question of Christianity’s apparent complicity is more nuanced. At the outset, Christianity is a set of metaphysical propositions that defy culture. When St. Paul wrote “become all things to all men,” he foresaw a world in which the Marthoman Church of Southern India was no less Christian than a Mississippi tent revival. This presents a problem in the secular world, which recognizes and protects culture but not underlying belief. To survive in such a world, religions must possess or develop a strong cultural hide. The smart cookies in the religious marketplace have cottoned on to this; not least Islam, which now cheerfully extends its cultural prohibitions deeper into the public sphere. The sneaking suspicion that Islam itself is a religious outgrowing of culture is not allayed by this phenomenon.

Culturizing Christianity, by contrast, means not only sacrificing its ineffable nature but also running into a thicket of postcolonial syllogisms. It may well be that J.S. Bach wrote the greatest music known to man, but as an 18th-century European he was also by definition an imperialist monster. Yet Bach himself would have recognized his music as distinct from the religious experience that inspired it, as something sacred but not itself holy. It is precisely for this reason that Christian countries became the originators of secularism, so that the state does not open windows into men’s souls; and, in turn, men’s souls do hawk themselves in the street. The downside of this separation is that when the cultural wolf does enter the religious henhouse, the hens must fend for themselves.

There is also a deeper rationale at work, drawn from Christian theology itself: that the faith is not set up for worldly respect. Jesus may be Lord of heaven, but the “Lord of this World” is someone quite different—the Devil. As prophesied, those who choose him will enjoy rewards on earth. Fan of metaphysical conspiracy theory will recognize this is as the basis of the famous “10 Point Plan” put forward by theosophist Alice Bailey. It outlined the key means of subverting Judeo-Christian societies—specifically by targeting normative notions of family, faith, and beauty; and especially among the young. This program was allegedly taken up by the founding fathers of the U.N. in their early conclave on Costa Rica, under the auspices of avuncular megalomaniac—and Bailey fan—Robert Muller. Looking around, I think we can all agree that Alice and Robert deserve a cigar. Their promise—that those who attack God will enjoy worldly approbation—bears more fruit with the passing years, not least in the blizzard of flashbulbs that greeted the craven red-carpet munchers of the Met.

Which leaves us with only one question: Why do the churches go along with it? Here too I refer you to the automatic writings of the good Ms. Bailey. The very keystone of her plan was that the church itself not only accept but endorse each pylon of its own teachings being kicked away. So it is that the Church of England’s website now offers ordination to those of all genders and none; and that a former Archbishop of Canterbury took his place among the communitarian shock troops of the Common Purpose organization. When it comes to the Catholics, the social(ist) gospel of the current Papacy offers a perfect placebo for the real thing. Being hand in glove with globalism of course means shedding some—if not all—of the precepts of the actual faith. And what better or more public occasion than the Met Ball?