Sex, Death, and Secrets in D.C. 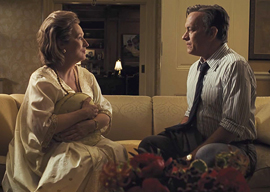 The new Steven Spielberg historical drama The Post is a celebration of how Democrats turn lemons into lemonade via their control of the media.

A prequel to the 1976 Watergate movie All the President’s Men, the new movie recounts how the Democratic Washington Post used an embarrassing 1971 Democratic scandal—Daniel Ellsberg’s leaking of the Pentagon Papers, the LBJ administration’s secret history of its own incompetence and insincerity in Vietnam—to take its first tentative steps toward eventually teaming up with the Deep State (in the person of J. Edgar Hoover loyalist Mark “Deep Throat” Felt) to overthrow the elected Republican president three years later.

Spielberg rushed The Post into production just last spring for the usual anti-Trump reasons. After the media’s eight-year-long sabbatical/siesta during the Obama White House, it’s good to see some energy and animus against a president, even if it tends to be wildly hypocritical.

Of course, Spielberg is not exactly the most self-aware ironist, so The Post, an earnest celebration of how Big Media supports “the people’s right to know,” doesn’t quite get its own joke about how convenient it was for the Democratic press’ uneasy conscience over how little it had criticized JFK and LBJ to be salved by a press putsch against the Republican in the White House.

Despite the hurry, Spielberg is such an extraordinarily competent filmmaker that most aspects of the film turn out fine, other than 85-year-old John Williams’ sappy score.

The Post is even better than Spielberg’s not-at-all-bad 2015 film Bridge of Spies, with which it shares a color palette: dark gray with splashes of bruised-looking colors. Lenses are chosen for some reason to make supporting actors look slightly grotesque in the manner of Sam Raimi’s Spider-Man comic-book movies and of Chester Gould’s Dick Tracy comic strip. As New York Times editor Abe Rosenthal, for example, Michael Stuhlbarg is made up to resemble a younger Al Lewis as Grandpa Munster.

Still, despite Spielberg’s late-career turn toward the visually grotesque, The Post is a well-made historical drama, like its predecessor Argo, Ben Affleck’s 2012 effort to spiff up the Democratic brand by making a movie out of a rare Carter-administration success. With better acting than Argo, especially from Meryl Streep as Washington Post heiress Katharine Graham, The Post will appeal to grown-up audiences partial to the Democrats.

Mrs. Graham, an expert at garnering sympathy, portrayed herself as a timid, awkward widow, despite usually winding up getting exactly what she wanted out of life. (For example, in the later 1970s, Mrs. Graham conducted a semi-public affair with the 13-years-younger Warren Buffett that helped cause that giga-tycoon’s wife to move out.) Streep has a blast playing Graham playing at being the ugly duckling who somehow contrives to always be the center of concern for Washington alpha males.

Tom Hanks does a decent job as Graham’s swashbuckling Boston Brahman editor Ben Bradlee (although he’s not as memorable as Jason Robards’ Oscar-winning version of Bradlee in All the President’s Men). Bradlee was descended from Crowninshields and Choates on his father’s side and from European aristocracy on his mother’s.

Bradlee served Mrs. Graham as a sort of new, improved version of her late husband, Phil Graham, the manic-depressive executive editor of The Post who killed himself in 1963 a few months before his friend President Kennedy’s assassination. (Phil Graham had been instrumental in persuading JFK to make LBJ his vice president, and his widow remained a strong supporter of Johnson.)

Phil Graham, older half brother of Sen. Bob Graham (D-FL), had been a key figure in “Operation Mockingbird,” the CIA’s project for co-opting prestigious liberal American journalists to trumpet the CIA’s talking points. This campaign was begun by Phil’s close friend, CIA ops boss Frank Wisner (another manic-depressive, who killed himself two years after Graham did), and was run by Cord Meyer, Bradlee’s brother-in-law. (Cord Meyer was apparently not related to Eugene Meyer, Mrs. Graham’s father, the German-Jewish chairman of the Federal Reserve, although this milieu is so incestuous that it’s natural to wonder.)

The Washington Post had sycophantically supported the Democratic JFK and LBJ administrations, including their policies of escalation in Vietnam.

After Phil’s suicide, the Post’s owner, social lioness Katharine Graham, was a close friend of Kennedy and Johnson’s Secretary of Defense, Robert McNamara. The movie is hazy on whether McNamara (played by Bruce Greenwood) and Mrs. Graham were sleeping together.

Bradlee was a key figure in the giant media cover-up of President Kennedy’s sexual predation upon the White House secretarial pool. Bradlee wrote, sounding rather like Sergeant Schultz on Hogan’s Heroes, that he knew nothing: “Like everyone else, we had heard reports of presidential infidelity, but we were always able to say we knew of no evidence, none.”

After all, who is more autistically unaware of human subtleties than Meryl Streep? Who could expect the most Oscar-nominated movie actress to notice that the most effective Oscar-baiting mogul was abusing less skilled actresses?

Spielberg portrays Nixon as a malevolent, Grinch-like figure infesting the White House illegitimately. Yet by the standards of 2017, Nixon was a polite gentleman around the ladies, while LBJ was a pig, as was JFK (although admittedly a handsome one).

And it’s not like the Democrats took a tough stand upon the public’s need to know about Secretary of State Clinton’s 33,000 emails. Nor did the Obama administration take a live-and-let-live policy toward Julian Assange.

Likewise, The Post celebrates Bradlee’s championing of “the people’s right to know” when a Republican was in the White House, but fails to mention his perjury in the trial of the man accused of murdering his sister-in-law Mary Pinchot Meyer in 1964, the ex-wife of CIA propagandist Cord Meyer.

Upon hearing news of her murder, Bradlee raced to Mrs. Meyer’s residence to break in and find her diary (which presumably documented her affair with JFK). To his surprise, Bradlee discovered that the CIA’s legendary head of counterintelligence James Jesus Angleton had picked the lock ahead of him and was ransacking the place. Bradlee explained that he ultimately burned her diary because he’d “concluded this was in no sense a public document, despite the braying of the knee jerks about some public right to know.”

In 1979, Mrs. Graham and Bradlee teamed up to get the publisher of an unauthorized biography entitled Katharine the Great to withdraw the book from circulation.

Now, you might think that this maelstrom of sex, secrets, and death swirling around The Washington Post’s glamorous central figures would make a lively soap-opera-ish film. But the Eagle Scout Spielberg is uninterested in their sex lives and instead wants to portray them as Mr. Smith Goes to Washington idealists.