Sexism On and Off the Field 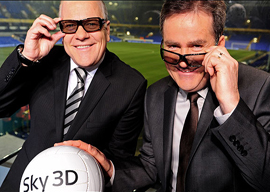 Someone then found footage of Gray asking a female colleague to tuck in his shirt, and this compounding effect deprived him of his job on the 25th. A reporter named Andy Burton was suspended for referring to Sian Massey as “a bit of a looker.” To make it a hat-trick, Keys resigned on the 26th after an apology in which he spoke of “dark forces” which made it impossible for him and Gray simply to recant and return.

These “dark forces” are political as well as personal. Sky Sports is owned by BSkyB, in which Rupert Murdoch holds a 39.1% stake he wants to make 100%. This recent sexism hullabaloo will not help when dealing with politicians looking for excuses to disoblige him.

Sky has also been trying hard to divest itself of its “blokey image“ and attract more couch potato-esses. The government is twitchy in its own right about sexism, with the Home Secretary taking the unusual step this month of publicly rebuking one of her own MPs for accusing feminists of “obnoxious bigotry.”

“Comments like those made by Gray and Keys can be heard any day of any week in any bar anywhere.”

On top of this, Gray is suing News of the World (owner R. Murdoch) for allegedly tapping his phone”a case embarrassing not only to Murdoch but also the government, because David Cameron’s former official spokesman was News of the World‘s editor at the time. Gray was also costing BSkyB a hefty £1.7m a year, and according to The Sun (owner R. Murdoch), he was unpopular with his workmates for being “coarse””an amusing primness from the paper which gave the world topless Page 3 girls.

On January 24, the BBC’s Alistair Magowan asked, “Is sexism still rife in football?” If it is, should we be surprised, and does it matter?

Magowan worries that a mere three women officiate on professional football pitches and only five Premier League clubs have women directors. There are no female club managers, although “England women’s team boss Hope Powell has said she would consider a position if asked,” which seems dashed decent of her.

The Independent‘s sports correspondent was informed by a “former female Sky Sports presenter” (presumably he means an ex-announcer rather than a transsexual) that “the world of sport on television is incredibly male, pale and stale.”