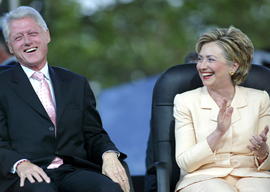 The concept of the power couple doesn”t fit within feminist doctrine, which assumes a battle between the sexes. Yet power couples are an ancient phenomenon, going back at least to Halicarnassus, where the various Queen Artemisias ruled with their brother-husbands.

On this 524th anniversary of Columbus” discovery of America, it’s worth noting the top power couple of 1492, Ferdinand and Isabella. Shakespeare’s most famous power couple is the Macbeths.

What’s forgotten in 2016 is that the Democrats launched the 1990s war of the sexes by going berserk over Clarence Thomas’s Supreme Court nomination in 1991. The unmarried Anita Hill asserted that the divorced and highly eligible Thomas made subtle insinuations.

But after he married a white woman, their once-friendly relationship curdled.

Anita Hill’s story was the biggest deal in the history of the world for a while, launching the Year of the Woman in politics, which Bill and Hill claimed they deserved to ride to the White House because, as Bill liked to say, they were “two for the price of one.”

Various people in Arkansas told me that Governor Clinton was a notorious hound, so in late 1992 I wrote an essay pointing out that the reigning fundamentalist interpretation of sexual harassment propounded by Democrats against Justice Thomas might get President Clinton impeached someday. But nobody wanted to publish it then.

Eventually, Clinton’s sexual harassment of Paula Jones while he was governor led to his impeachment and disbarment.

Defending the sexual-harasser-in-chief took the wind out of the sails of feminism for many years. But the Democrats relaunched the war between the sexes in 2012 to get Obama reelected.

At the end of Klein’s Primary Colors, the big revelation is (spoiler alert) that Mrs. Stanton used to be a lesbian and probably still would be if Mr. Stanton weren”t so darn sexy. Personally, that didn”t seem terribly unexpected, and it was actually a little sweet that Bill used his powers of sexiness to convert her from playing for the other team. Admittedly, attempting to convert homosexuals is an absolute no-no these days, but the rules never much applied to Bill.

(Whether Hillary has converted back is not for me to say, but it would seem like a pretty interesting topic for one of the huge number of bored reporters following Hillary around to investigate. Just saying…)

The problem for Hillary, an extremely proud person, is that she has had to publicly humiliate herself by putting up with her husband’s constant infidelities in order to draft off his knack for political power. She’s rationalized her behavior by blaming society’s patriarchal bias for what she’s had to put up with to achieve maximum power. Lately, Hillary has sublimated her resentment of her tall, wide, fair-haired, camera-loving husband into her rage against her husband’s tall, wide, fair-haired, camera-loving golf pal, Donald Trump.

All of this psychodrama in Hillary’s head is understandable as a way of displacing her anger toward her indispensable husband into hatred of deplorables like you and me.

But then again, my feeling is: Hey, lady, I didn”t ruin your life by cheating on you with all those librarians. I really don”t see why we are obligated to elect you president to make up for how much Bill embarrassed you. Please, take your issues with your husband out on him, not on the rest of us by starting World War III.