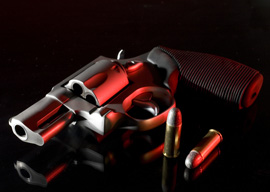 Weeks after the Sandy Hook shooting, which was blamed on everything from Ke$ha to Mortal Kombat, most news outlets are still in panic mode. One newspaper, though, went “full retard.”

The Journal News of Lower Hudson sought to shame gun owners, specifically the ones who obtained their guns legally. So the newspaper published the personal details of every handgun permit holder in Westchester and Rockland Counties, complete with interactive Google Maps pinpointing their locations.

The piece opened with a fear-inducing account of a local woman who was shot in the back of her head in May. Ironically, her assailant owned two unregistered handguns that wouldn’t have been listed on the newspaper’s map. Dwight R. Worley, the story’s author, then interviewed a few antigun clowns from the neighborhood, including one man who voiced support of The Journal News‘s decision but requested anonymity.

“The newspaper learned that shame is a knife that can cut both ways.”

The anonymous ball of confusion said that if he’d known his neighbors were gun owners, he wouldn’t have bought his house in the first place.

His neighbors declined to comment, but maybe they wouldn’t have bought their houses, either, if they’d known they were going to live next to such a sissy.

For gun owners such as 73-year-old Veronica Hash, who described her firearm as “the only thing that makes [her] feel relatively secure,” the attempt at shame is akin to the methods used against sexual predators. For individuals who don’t own guns, their absence on the map is a clear sign to criminals: This house is unprotected.

Unhappy about the map, a few pro-Second Amendment activists returned fire. “I don’t know whether the Journal‘s publisher Janet Hasson is a permit holder herself,” one man wrote, “but here’s how to find her to ask.” He then listed Hasson’s personal information”including her phone number and home address (with interior and exterior photographs)”and did the same thing to reporter Dwight Worley, visual editor Robert Rodriguez, and even Gannett CEO Gracia Martore.

Others chimed in with additional information, and one man created a new interactive map: “Where are the Journal News employees in your neighborhood?”