She Never Hurt One Animal 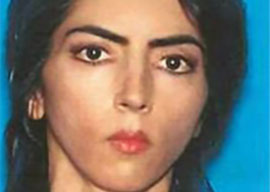 I have a feeling deep in my innards that if the psycho-looking female Persian self-described “vegan bodybuilder” Nasim Aghdam had simply eaten the occasional cheeseburger, last week’s foiled would-be massacre at YouTube headquarters in California may have never happened. A few cows would be dead, but she would be alive and three people wouldn’t have been injured in her vegan rampage.

To her credit, Aghdam was the rare female mass shooter in a world unfairly overpopulated with male killers, but just like your average bumbling woman who can’t throw a fastball or change a simple oil filter, she fired into an open crowd and only injured three before killing herself.

Wearing a black headscarf last Tuesday around lunchtime, 38-year-old Nasim Aghdam and her terrifying eyebrows entered a food court at the YouTube headquarters in San Bruno, CA with a Smith & Wesson 9MM handgun and fired off an estimated 20 shots before blowing off her own clearly disturbed head. She managed to injure three: one who’s in critical condition, one in fair condition, and one in stable condition.

“To my knowledge, no NRA member has ever committed a mass shooting. But with the case of Nasim Aghdam, we now know that at least one former PETA member has.”

Five years ago when a fraternal tag team of disgruntled Muslim immigrants bombed the Boston Marathon, liberal journalists made asses of themselves yet again by publicly hoping that the bomber had been a white American instead. The same wishful thinking erupted in the wake of last Tuesday’s shooting, with one white-looking male tweeting that he would “eat my fucking hat” if “this shooter at YouTube isn’t a white male with far-right leanings.” (At press time, it appears that he has yet to eat his fucking hat.)

But the very fact that the shooter wasn’t a white male with far-right leanings means that this news story—a mass shooting at one of the world’s largest tech corporations—is already sinking like a stone.

If not a white male with far-right leanings, who was this crazy-looking twat named Nasim Aghdam? Born in Iran but a member of the Baha’i faith rather than a Muslim, Aghdam came to California as a refugee with her parents in 1996.

From a very young age I used to care about the animals and their welfare, and think about the source of meat and where it came from and I knew that the fried chicken on my dinner plate once was a beautiful yellow chick!

Ever known a girl who was really, really, really, REALLY into animals? I mean, there’s nothing wrong with animals—I’ve loved them all my life, whether cats, dogs, or even the occasional African Pygmy Hedgehog. But have you ever known a girl who was hot beyond all imagining but could never develop and sustain a stable relationship with human beings due to the fact that she owned fourteen rats, seven cats, six dogs, nine turtles, and a trio of severely disabled geriatric ferrets—all within the stinking confines of a studio apartment? Have you ever been with a girl who committed coitus interruptus because she’d forgotten to feed her chinchilla? To me, Nasim Aghdam seems like precisely that kind of girl.

Some people suggest she’s not a girl at all, at least in the biological sense. Due to Aghdam’s massive Adam’s apple, firm biceps, and disturbingly unreal looks, there was speculation that “she” was a “he.” This was all swatted away as a bigoted “conspiracy theory” in favor of turning it back toward the mainstream media’s favorite conspiracy theory, which is that the NRA supports and encourages mass shooters.

To my knowledge, no NRA member has ever committed a mass shooting. But with the case of Nasim Aghdam, we now know that at least one former PETA member has. And among the estimated five million NRA members who allegedly rule American politics, good luck finding one who looks nearly as insane as Aghdam did. Her searing eyeballs could burn holes in the back of your brain for days. Her videos seem designed for no other reason than to induce seizures and brain damage.

Dictatorship exists in all countries but with different tactics! They only care for personal short term profits & do anything to reach their goals even by fooling simple-minded people, hiding the truth, manipulating science & everything, putting public mental & physical health at risk, abusing non-human animals, polluting environment, destroying family values, promoting materialism & sexual degeneration in the name of freedom,….. & turning people into programmed robots!

So based on her own words and actions, it appears that her main beef—see what I did there?—was that YouTube ruthlessly silenced her and mercilessly snatched away her income because the mega-corporation’s top brass seek to slaughter and devour the very animals she has made it her life’s mission to protect and cuddle.

I will note for the record that when YouTube demonetized a Jared Taylor video, he did not storm into their offices and shoot at their vibrant and diverse staff.