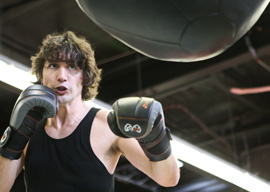 “I think it would be appropriate for Earth Hour in the interests of the environment for the Senator to punch Justin Trudeau’s lights out.”

That was author Mark Steyn, speaking for millions of Canadians right before the hyper-hyped, nationally televised March 31 charity boxing match between ponytailed Conservative Senator Patrick Brazeau and Liberal MP Justin Trudeau. Slender of body and of resume, Justin is the photogenic son of the notorious Pierre.

Earth Hour is normally observed with Hasidic rigidity every year in Canada’s big cities. At 8:30PM, office towers fall dark for sixty minutes. Smug scolds click off lights and TVs at home, lighting candles instead (thereby increasing their carbon emissions, but no matter). Back in 1980, when oil-rich secessionist Western Canadians popularized anti-Trudeau bumper stickers that read, “Let the Eastern bastards freeze in the dark,” they never imagined the SOBs would do it by choice.

This year, however, left and right, East and West alike were tuned in to the upstart Sun News Network at viewing parties, cheering their favorite fighter and insulting each other on Twitter. It was all terribly violent, even un-Canadian“but for a good cause, don”t you know?

“Are Canadians stupid enough to elevate an unqualified man-child to the land’s highest office based on an upset in a glorified pie-eating contest?”

The fight’s surprising outcome sparked speculation that we were poised to endure a truly bloodcurdling prospect: another Trudeau in 24 Sussex Drive.

Except for a one-year hiatus, Pierre Elliot Trudeau was prime minister from the time I started kindergarten until my high-school graduation. No wonder his Liberals considered themselves, until last year’s humiliating routing, the nation’s “natural governing party.”

Trudeau imposed bilingualism, multiculturalism, wage and price controls, and unfettered immigration (creating generations of hardcore Liberal voters by the millions); decriminalized homosexual acts and abortion; imposed martial law with a shrug (“Just watch me“), then grandly bequeathed us his dubious “Charter of Rights and Freedoms“; gave protesters the finger, slid down banisters, pirouetted behind the Queen’s back, and”our betters assured us”made Canada modern and cool. Trudeaumania was our Camelot and PET our JFK.

As his biographers famously put it, “he haunts us still.” The nation’s elites, drunk on a ghastly cocktail of cynicism and sentimentality, have never disguised their dynastic dream that Justin Trudeau will one day take his father’s place.

But here’s the thing:

By his thirty-fifth birthday, Trudeau pere had a Master’s from Harvard, then moved on to the London School of Economics. He”d founded a hugely influential political journal, worked in the Privy Council Office, and got himself barred from the United States as a potential subversive.

At the same age, his son Justin (B.Ed.) was a teacher. A drama teacher. A substitute drama teacher. (He made the most of his JFK Jr. moment in 2000, delivering an admittedly moving eulogy at this father’s funeral, then melodramatically throwing himself across the casket.)