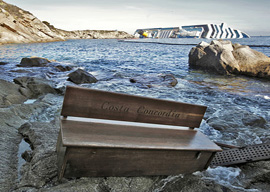 It wasn’t Italy’s finest hour. Not even Gabrielle D’Annunzio—poet, patriot, propagandist, and proto-fascist—could spin this into a maritime Titanic-like drama. Once the Costa Concordia hit a rock off the Tuscan coast, the passengers and crew acted like cowards. This much we know. But knowing Italy—a country that successfully switched sides in both World Wars—the truth will never emerge. Human nature’s eternal glories and failings have always played a leading part in Italy’s long and magnificent history. Heroes turn into baddies, defeats into victories, burlesque into opera. They say Italy is more of an idea than a country. Where else would a benevolent dictator’s innocent mistress be shot and hanged upside down by men who pride themselves as protectors of the weaker sex?

When I first heard the news of the Costa Concordia’s sinking off an island I have sailed around more times than I can remember, I thought it was a joke gone wrong. Surely the reason was bella figura, the Italian male’s unique style of pride, all show and no substance. Since it is the centennial of the Titanic’s sinking, for one sick moment I imagined some show-off captain had tried an impossible maneuver to impress his friends ashore. As of this writing, it seems that is why he went 300 meters off the mainland rather than the required 1,500. Still, at least 17 people are certified dead. Even in Italy, Captain Schettino risks going down in history as a man who not only ran his boat aground—modern equipment notwithstanding—but one who was in the bar with two female companions and who jumped ship long before his passengers.

“The strong managed to get a place on the lifeboats; the weak did not.”

In the chaos that ensued after the ship began to sink, the legendary edict of women and children first—which is not part of maritime law, and I would know, since my father was a ship owner—fear took over with the predictable Darwinian results. The strong managed to get a place on the lifeboats; the weak did not. But 100 years ago when the Titanic sunk, 72% of the women and 50% of the children were saved, as opposed to 18% of the men. With a few exceptions, this was the way it should have been. Three Italian men from steerage were allegedly shot dead for disobeying the order to allow women first. The ratio of those who survived reflected the era’s chivalry.

Which brings me to Cosmo Duff-Gordon, a Titanic survivor, a Scottish aristocrat and landowner, and a Silver Medal Winner in the 1906 Olympics in fencing. Looking at his record, Duff-Gordon embodied the ideal of the clean-living hero, the Beau Geste of the upper classes. Yet all the qualities of leadership, heroism, pride, and noblesse oblige failed him when it really counted. He escaped on Lifeboat No. 1, the only man among women and children. It was also whispered that he and his wife bribed rowing crewmen not to pick up victims in the water in case they swamped the boat. (This was never proved.) In his defense, Lifeboat No. 1 took on only 12 people. Still, he stinks to high heaven.