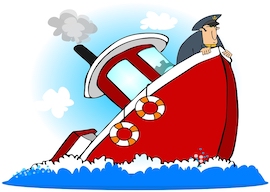 The RMS Titanic was notoriously marketed as “unsinkable” because it featured sixteen internal watertight compartments. If its hull sprang a leak at any one spot, doors would automatically shut and contain the water. If no more than two, or in some cases four, compartments flooded, the Titanic would stay afloat.

Unfortunately, by sideswiping an iceberg, the Titanic compromised its hull, perhaps in part due to poor-quality rivets. The long gashes and separation of the plates exposed a fatal five compartments to the sea. Moreover, the internal bulkheads didn’t extend all the way up to the deck and therefore weren’t as watertight as advertised, allowing water to slosh throughout. The Titanic therefore sank rapidly, before help could arrive.

But that doesn’t mean separate compartments within the hull were a bad idea. They remain a shipbuilding standard today.

Thinking about the fundamental trade-offs of ship architecture offers an unsettling insight into the design dangers in both the European Union and United States of America.

These two ships of state lack watertight internal compartments, which increases the need for strong external borders to prevent flooding from abroad. In a century in which would-be migrants from the Global South will increase vastly in number, we need to draw analogies from the maritime disasters of the past to have a chance of avoiding a similar fate.

The Titanic was hardly the first ship to feature internal barriers. The concept of compartmentalization, the nautical version of not putting all your eggs in one basket, was invented by Han dynasty Chinese shipwrights nearly 2,000 years ago. Designers would compensate for a potentially fatal weakness in the external hull by restricting the mobility of water within the ship.

A different way to cut down on disasters at sea is to lessen the chance of an external leak by adding a second bottom or an entire second hull. In the wake of the 1989 Exxon Valdez oil spill in Alaska, Congress mandated that oil tankers have double hulls. The last old single-hulled tankers were phased out in 2015.

Just as at sea, the less protection from immigration leaks that the E.U. or the U.S. has from internal borders, the more we need stronger security around the continent.

Of course, not all U.S. and E.U. elites see swamping by illegal immigrants as a problem.

How to allocate political decision-making within such large entities as the U.S. has always been a difficult question.

“Thinking about the fundamental trade-offs of ship architecture offers an unsettling insight into the design dangers in both the E.U. and the U.S.”

As a vast continental-scale polity, the United States reserves a fair amount of control to states, and states cede much control to localities.

The U.S. was briefly a loose confederation, but the 1787 Constitutional Convention devised a more centralized federal system. Of course, the Constitution still reserved a significant amount of power to the states. The Tenth Amendment, added in the 1789 Bill of Rights, declares:

The powers not delegated to the United States by the Constitution, nor prohibited by it to the states, are reserved to the states respectively, or to the people.

Over time, those with the whip hand in Washington at the moment pushed against states’ rights in the name of federal dominion. For example, the slave states generally ran Washington before the Civil War, so they increasingly used the federal government to force the states opposed to slavery to help them maintain their peculiar institution, shoving through anti-states’-rights impositions such as the Fugitive Slave Act and the Dred Scott decision.

But then in 1860, the Democrats self-destructed and Republican Abraham Lincoln was elected with only 40 percent of the vote. Immediately, the Fire-Eaters of South Carolina rediscovered the sacred principle of states’ rights and launched the Confederacy.

Similarly, in this century, after a long stretch of liberals imposing their whims upon the fifty states, such as forcing local bakers to prepare gay wedding cakes, the election of Donald Trump suddenly reopened the eyes of progressives to the philosophical virtues of states’ rights. For example, the Sierra Club complained last year:

And while the Democrats’ rediscovery of federalism is hypocritical, it is not unreasonable. After all, America is indeed a giant landscape, and policies that seem sensible at one latitude and longitude often don’t appeal in another. We can all get along better if we don’t insist that Washington impose every one of its dictates upon each state.

But that raises the question of which policies should be under local control and which need to be federal. With an incredible 5,000 more Central Americans engulfing the U.S. each day, we need to think hard about this.

For example, one of the privileges of American citizenship is that the U.S. has always allowed citizens to move freely within states. A Florida man can take a job in Idaho, no questions asked.

On the other hand, even though, say, Delawareans can legally move to San Francisco, finding lodging there is likely to be a nightmare because liberal coastal Californians have imposed a web of state, municipal, and neighborhood regulations that economically dissuade their law-abiding fellow Americans from flocking to the Golden State. The current rent for an average 792-square-foot apartment in San Francisco is $3,609.

Yet, immigrants who intend to have a lucrative sojourn in San Francisco for a few years and are thus willing to temporarily sleep in bunk beds and violate rules against overcrowding are less hindered by local laws.

Moreover, San Francisco has declared itself a “sanctuary city” in which rule of law does not apply when it comes to United States immigration codes.

But do states’ and cities’ rights over immigration make more sense than national sovereignty?

Because the United States lacks internal compartmentalization restricting movement, the conclusion of almost everybody who has thought rigorously about the issue has been that the federal government’s control over immigration is essential.

Granted, the Articles of Confederation put each state in charge of deciding upon American naturalization, but as The Federalist Papers points out, that was a bad idea. The need for uniform immigration law makes it a fundamental federal concern, as in Section 8 of the Constitution:

The Congress shall have power…to establish an uniform rule of naturalization….

Local control of immigration might make sense if immigrants were to stay forever in the sanctuary cities.

And in March of this year, San Francisco won again, when the Ninth Circuit ruled that Kate’s parents couldn’t sue the city for having released Zárate without telling federal immigration authorities (who would have deported him).

Now, you might say that if San Francisco wants illegal immigrants like Zárate so much, it can have them.

Sanctuary cities tend to leak immigrants in large numbers to the rest of the country, especially after illegal aliens have acquired some impediments to deportation, such as fathering a U.S.-born anchor baby, sending for a Dreamer, or concocting a sad story about oppression back home.

The European Union is somewhat more compartmentalized than the U.S., consisting of separate countries with their own languages, laws, and leaders. But who exactly is sovereign—the member states or the E.U.—is not all that explicitly spelled out.

The member states have decompartmentalized with a mutual right for their citizens to work in each other’s countries and the ability to travel from country to country without showing a passport.

But these agreeable internal amenities raise the obvious question of perimeter integrity. If the shipowner strips out the internal compartments, the hull had better not leak.

But the normally bossy E.U. delegated border defense of the continent to individual member states, not seeing it as a collective responsibility. Of course, the poorer states, such as Greece, didn’t have much short-term incentive (or means) to turn back migrants arriving by sea since the newcomers hardly wanted to stay in Greece, with its flat-broke welfare state.

The E.U.’s attempts to rip out the old bulwarks between nations, while failing to adequately shore up Europe’s outer hull, threatens to let a Third World immigration leak into any one country, such as Merkel’s miscue in 2015, eventually inundate much of the continent.

In turn, this combination of the E.U.’s fundamental flaws set off Brexit in 2016 as the British headed for the lifeboats. But, as on the Titanic, it’s turned out that there aren’t as many as hoped.