Short Man With a Long Reach 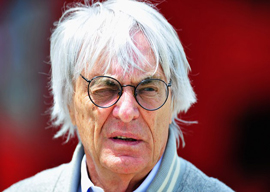 Bernie Ecclestone is a gnomish Brit ex-grease monkey. He is my neighbor in Gstaad, the small alpine Swiss village which once upon a time was the Mecca of the old rich and titled but is now slowly turning into the playground of the nouveaux riches and vulgar. I”ve often written about Bernie because for a very short man, he has a very long reach. About ten years or so ago he bought a beautiful old inn, a Gstaad landmark used by both locals and tourists, and turned it into a chic boutique type of restaurant/hotel whose prices only the very rich can afford. I wrote about it in the Spectator, and Bernie answered that it was not his fault my finances were not up to it. Par for the course.

He recently purchased yet another chalet for his daughters, both of whom are experts in knowing the price of everything and the value of nothing. Ecclestone is a multi-billionaire, having made his fortune as owner of Formula I Grand Prix racing, whatever that means. Bernie doesn”t own the teams that race, nor the courses where the racing takes place, yet somehow he has made billions for reasons that escape me.

“It’s a bit like Al Capone taking out an ad urging for more police in Chicago.”

I think Europe is finished. It will be a good place for tourism but little else. Europe is a thing of the past.

Enter the Brussels gang. The bureaucrooks of Brussels have begun an advertising campaign that aims to encourage young Europeans to take charge of their economic future by starting businesses. They hired the M&C Saatchi advertising company and have shot an ad in London institutions such as the V&A Museum and the British Library highlighting displays that feature historical thinkers including Plato, Galileo, and Darwin. A narrator reads Bernie’s message while a girl in a glass takes a hammer and shatters the glass. “This is not my future,” she says.

The not-so-subtle message is that Europe is moving forward and should not be consigned to a museum of economic and technological history. So far, so good, but like everything that Brussels preaches, it’s totally false. In fact it’s so false, I for once am on Bernie’s side. To be an entrepreneur in Europe nowadays is a very dangerous business. There is a rigid labor market across Europe that makes it extremely costly to hire and fire workers. Even worse, the banks are not lending any money.

A friend of mine in France, a karate instructor, wanted to hire a couple of assistants so he could provide more classes in his rented studio throughout the day. One of the assistants turned out to be a total dunce. My friend could not fire him, is stuck with him, and is losing business because of him. The French state is behind the dunce. So much for the entrepreneurial spirit.