Should You Vote for President? 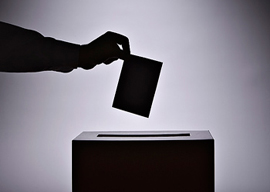 Can you vote by not voting? In a presidential election year in which the critical issues have been how much personal behavior the federal government should regulate and how much private wealth it should transfer and consume, rather than whether it should do so, many folks who are fed up with what George W. Bush and Barack Obama have brought us and fear more of the same from Mitt Romney are seriously suggesting that they will express their profound objection to big government by not voting for anyone for president.

On the other hand, I know many good freedom-loving people who are fed up with big government but view Romney as the lesser of two evils from whom they expect a turn away from the path of government sector growth and private sector shrinkage on which President Obama has taken us.

The president has stated in his campaign for re-election that he underestimated the weakness of economic forces, and he now knows that no one could have corrected them in the past four years. Essentially, his best argument is that he has consumed his first term learning what to do to correct our economic woes, and he needs another four years in office to put into effect what he has learned. He wants to borrow more and spend more and transfer more wealth.

“I reject the idea that a principled vote is wasted.”

What he fails to realize, of course, is that you cannot correct a problem essentially created by too much government borrowing and spending with more government borrowing and spending. The president’s values are Wilsonian: Personal freedom and private property can be subordinated to the common good; the federal government knows better than the free market how to bring about prosperity; killing is such an effective tool of foreign policy that the decision to kill cannot be vested in a Congress that can’t produce a budget; and the Constitution is merely a guideline to be consulted from time to time. I am sure he believes that our rights come from the government and not from our humanity.

Romney does understand that only private enterprise can produce wealth, while the government merely transfers or consumes it. I believe him when he argues that the degree of federal involvement in the free market distorts the market, gives certain parts of it a false sense of stability and expectation, and ultimately costs more than it helps. The cost is in tax dollars taken from those who could otherwise employ those dollars for investment, thus impeding prosperity and jobs. And the cost is in government borrowing that is never repaid but merely rolled over, and in the debt service that now exceeds half a trillion dollars annually.