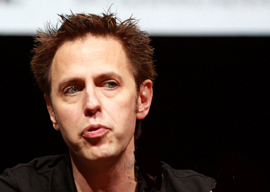 It’s baffling to me that some people still can’t grasp the simple notion that humor is subjective. I have friends—decent, smart people—who’ll say things like “[fill in the blank] jokes aren’t funny,” as though it’s an objective statement of fact. Sometimes the blank is “rape,” sometimes “pedophile,” sometimes “homophobic,” sometimes “racist.” The specifics don’t matter. What matters is that the only proper way to say “[blank] jokes aren’t funny” is to immediately follow it with “to me.”

The average person will say “I don’t like pickles” instead of “It’s wrong to eat pickles.” In food, we grasp the concept of personal taste. In humor, too many of us don’t.

Which brings us to James Gunn. Gunn is the exceptionally successful writer and director of the Guardians of the Galaxy films, which have earned about $2 billion worldwide. He also executive-produced Avengers: Infinity War. The dude’s an A-lister, to be sure. But before he made the big leagues, he was immersed in the world of dumb, wacky, low-budget movies. He wrote and directed for Troma, an East Coast production and distribution company that makes bad films on purpose. Vulgar, lowbrow comedy-horror flicks. No joke is too base, no image too disgusting. Kids decapitated for a laugh, rape scenes played as a joke, and lots and lots of dicks. Race, gender, weight, sexual preference—nothing’s off-limits. Now, this is either your cup of tea or it isn’t. But one thing that even Troma’s detractors are forced to admit is that the company is an equal-opportunity offender. No politically correct BS, no fear of angering “social justice” groups.

That was James Gunn’s world before he lucked into directing one of the biggest franchises of the past decade. So, as one would expect, his old tweets are pretty raw. Jokes about rape, pedophilia, and trannies. Note that I said the word “jokes.” Are they funny? Not to me. Gunn lacks the skill of a master like Norm Macdonald, who can take topics like child molestation, rape, or burying a woman in a shallow grave and create true comedic art.

That’s my opinion, of course. To some, Macdonald is grating and unfunny (those people are 100% wrong, but I probably shouldn’t queer my initial point about comedy being subjective).

“The ever-growing craze of destroying people because of dumb jokes and offhanded comments has zero merit, and it has to stop.”

Along with being not terribly funny, James Gunn is also an ideologue. He hates the right, and he lets the world know it. He hates Trump, he hates lil’ Benny Shapiro, and he applauded the destruction of Roseanne Barr after her Planet of the Apes tweet.

Last week, everyone’s favorite alt-right troll, Mike Cernovich, decided he’d had enough of Gunn’s two-bit leftist moralizing. So a-diggin’ he went, and he unearthed all those nasty old tweets. And Disney promptly fired Gunn from the next Guardians of the Galaxy installment. Gunn canceled his appearance at the San Diego Comic-Con (the Cannes of nerd-dom), and his future in the business is very much in doubt.

Moved by the peine forte et dure, Gunn apologized and begged for forgiveness. But seriously, does that ever work anymore? Of course not. The man’s toast. And his fate has divided the right into four camps:

(1) The Pizzagaters. These nuts believe that Gunn’s public tweets prove there’s a top-secret, organized cabal of pedophiles in Hollywood.

(3) The Schadenfreuders. “The bastard got what he deserved for cheering when the same thing happened to Roseanne. Maybe if enough lefties suffer because of these witch hunts, they’ll finally stop doing it to us.”

The Pizzagaters are barely worth talking about. Gunn’s tweets were jokes, not confessions (something Ted Cruz seems to have trouble grasping). As I explained in 2016, leftist comics who want to be seen as “edgy” do kiddie jokes because it’s all that’s left for them. They can’t do race, women, or gay jokes. Kids are all they’ve got.

The Moralists? These people were the bane of my existence when I was a GOP organizer. Your morals are your own, and you’re welcome to them. But don’t claim that this or that kind of joke is “never” funny. I’ve heard funny rape jokes and funny pedo jokes, just as I’ve heard funny lynching jokes and funny Holocaust jokes. If it’s done with skill, it can be funny. Thirty years ago, when “misogynist” comic Andrew Dice Clay hosted Saturday Night Live, feminists protested the show because he’d made an incest joke. I opposed them then, and if you’re the same animal but wearing red instead of blue, I oppose you now.

Then there are the Schadenfreuders. I’m not unsympathetic to them. Seeing leftists felled by the hysteria they helped create is indeed satisfying. But I think this camp has it wrong. This kind of crusade doesn’t slow down just because leftists get targeted. Most of the men fired and banished by #MeToo were leftists. #MeToo only began to lose steam when studios and networks stopped automatically firing people without due process. For example, Morgan Freeman survived. And then there’s Chris Hardwick, the popular talk-show host who was recently accused of all manner of terribleness (including outright rape) by his bitter (and somewhat deceptive) ex of five years. Recent reports indicate he might actually survive the scandal. If he does, that will further quell the #MeToo hysteria.

Now, the anti-speech crusade is not #MeToo. Some of the #MeToo targets were legitimately foul creatures whose (in some cases criminal) behavior was such that any respectable company would dump them. #MeToo had some merit. But the ever-growing craze of destroying people because of dumb jokes and offhanded comments has zero merit, and it has to stop. I take no pleasure from seeing a lefty ruined because of jokes. What the Schadenfreuders don’t get is that this will not help us, and it will not hasten the end of the hysteria. Kooks like Cernovich are contributing to the cycle of reciprocal accusations and firings. Leftists are not going to respond to the Gunn firing by saying, “Dang, these witch hunts have gotta stop.” Rather, everyone will respond by saying, “Shit, now I really have to watch my words.”

The witch hunts will end when companies stop reflexively firing people. The fact that a Hollywood guy got fired for making offensive jokes on his Twitter account years ago (including jokes that targeted women and trannies) is not a right-wing victory. It’s just more speech suppression, more speech punishment.

There are no words for how idiotic that is.

The left’s ultimate goal is European-style censorship laws. Advocating speech suppression for anyone, including leftists, only furthers that goal. Is anyone stupid enough to think that calling James Gunn an actual pedo because of his jokes is going to make leftists say, “Oh my gosh, is…is…is this how it feels when we call you guys racists? What have we done? Thank you for helping us see the light by using our tactics against us and teaching us empathy. Free speech for all!”