Though it’s been said that a “liberal” is someone willing to argue against his own position in a dispute, a characteristic quality of the contemporary American variety is that he thinks anyone who disagrees with him is either obstructing democracy or else racist and insane (at any rate, he should probably be apprehended by the authorities.) Take, for instance, this from one Steven Pearlstein, the Washington Post‘s “business columnist”:

The recent attacks by Republican leaders and their ideological fellow-travelers on the effort to reform the health-care system have been so misleading, so disingenuous, that they could only spring from a cynical effort to gain partisan political advantage. By poisoning the political well, they’ve given up any pretense of being the loyal opposition. They’ve become political terrorists, willing to say or do anything to prevent the country from reaching a consensus on one of its most serious domestic problems.

The public “reaching a consensus” means, of course, everyone agreeing to do exactly what Barack Obama and the WaPo editorial board want. Anyone who could possibly stand in the way of Washington “solving the problems faced by working families” (or some other phraseology) is a spoilsport, if he’s not guided by more sinister motives. Indeed, Americans who form groups for right-wing causes (even rather mild, unfocused ones like the opposition to healthcare reform and the “taxed enough already” TEA Parties) are considered, if not subliminally racist, then blazers-and-khakis corporate stooges (“Astroturf”), paid off by the boys upstairs. This interpretation is put forward by the ALF-CIO’s Secretary Treasurer Richard Trumka in his official response to the voicing of any dissent at townhall meetings:

Mob rule is not democracy. People have a democratic right to express themselves and our elected leaders have a right to hear from their constituents”not organized thugs whose sole purpose is to shut down the conversation and attempt to scare our leaders into inaction.

We call on the insurance companies, the lobbyists and the Republican leaders who are cheering them on to halt these ‘Brooks Brothers Riot’ tactics. Health care is a crucial issue and everyone”on all sides of the issue”deserves to be heard.

It’s so good to see labor unions speaking out against “organized thugs”! And much as with Pearlstein, everyone’s voice being heard means that some people need to just shut up.

Anyway, Trumka has the whole thing backwards. Those Brooks Brothers-attired executives in the medical industrial complex will soon be as pleased as ammunition manufacturers to see their industries go on the permanent public dole. Even insurance companies, which could expect to be pushed out of the low-end and middle-class markets by the new “public option,” might actually benefit by transforming themselves into high-monthly-premium “luxury care” providers. The worse the public option is, the more they can charge. 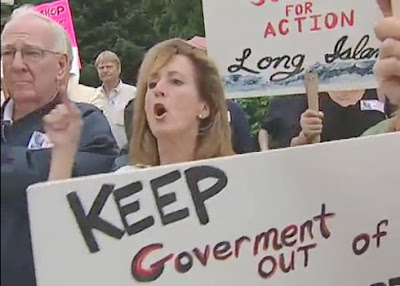 And just as the Beltway Left, as evidenced by Steven Pearlstein and Paul Krugman, is taking up Bush-era tactics and claiming that opponents are metaphoric “terrorists””if they”re not actually “betraying the planet“”many have also learned well from the previous admin about how to get massive, budget-busting things done in DC.

First, you trump up a problem (2003: Terror/WMD/Saddam!; 2009: Healthcare costs! (which, granted, are outrageously high, though not for the reasons Obama, Krugman, & Co. say they are)). Next, you declare loudly that something just must be done, and you offer your gargantuan program (which you”ve wanted to enact for decades) as the one solution forced upon us all by the terrible predicament we”re in (We must invade Iraq!; We must have universal healthcare coverage!). Thirdly, you lament that the other side “offers no solutions” and is preventing a “consensus,” and you might have to also express chagrin at long-time allies who are reluctant to jump on board (“unpatriotic conservatives”; Blue Dog Democrats). You finally agree to “compromise” and perhaps whittle down some of your more outlandish proposals (Send Colin Powell to the UN; lower the proposed taxes on small businesses.) No matter what, you win in the end because you started the whole process off demanding something really big, forcing people to “compromise” towards your position, so to speak. (For another example of this technique, see the “debate” last January over Obama’s “stimulus” package, which was deemed too costly at $1 trillion and thus reduced to the paltry sum of $700,000,000,000.00.)

Unfortunately, the mainstream Republican opposition isn”t arguing effectively against Obama’s healthcare reform at all (Peter Schiff and the Drs. Paul, pÃ¨re et fils, are exceptions, of course). And in this instance, one of the Beltway Left’s stereotypes of Republicans is actually fairly accurate: they are simply “defending the status quo” (with some overdone warnings against mass euthanasia and “death panels“ thrown in for good measure.)

As alluded to above, while prices in other technology-driven industries are falling, healthcare costs have become utterly bizarre: American’s spent $2.3 trillion on medical expenses in 2007, $30,000 per family! And even the most rudimentary health insurance plan (like the one I have) costs around $150 per month. Sad to say, mainstream Republicans are intellectually unequipped to talk about the fact that costs are so high specifically because the federal government is already subsidizing too much medical insurance, thus giving providers few incentives to cut costs. (If your company’s granting you free healthcare (and getting a tax break to do it), then why would you care how many unnecessary procedures and tests you have done, or how much it all might cost? You”re not the one paying for it.) This or else the GOP is afraid of being called wicked, heartless Scrooges for actually saying out loud that it”d be better if there were less medical insurance coverage for routine procedures, more “uninsured American families,” as costs would soon plummet across the board.

As the GOP remains the Stupid (and Cowardly) Party, grassroots conservatives standing up at townhall meetings shouting “NO!” is about as good as it gets.