Signs of a City on the Edge of a Nervous Breakdown 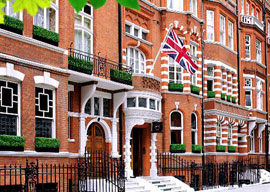 Dr. Watson’s description of London”” that great cesspool into which all the loungers and idlers of the Empire are irresistibly drained””has never been more apt. Admittedly the Empire has gone, but walk down any street in central London and you”ll come across a bar or restaurant stuffed to the gunwales with loungers and idlers.

Hurrah for that, you might say, and I”d agree with you. My general impression of loungers and idlers”possibly excluding spongers, but sometimes there’s even a valid case to be made for them”is that they”re tremendously good company and I wish more people could afford to take up what is a pretty venerable profession, if not the oldest one.

But here’s the rub. The curfew tolls the knell of parting day”depressingly early with licensing laws like a Puritan at the Restoration”out of date, unwelcome, and asking to be chucked into the Thames. Then everyone boards their buses, tubes, or taxis and heads off in a general diaspora to depressing suburban Limbos where the lights ahead are either the home fires burning or the local Tesco after a riot. I know this human disgorgement happens all over the world and it’s unavoidable. But London is different these days. In most cities only some of the bar crowd are too far from home to walk; here, it’s pretty much all of them. If you happen to live in the center of town like Gray in his churchyard, you feel like everyone’s left the world to darkness and to me. And that’s not much fun at all.

Go to many of the more upmarket areas in town”Mayfair, Knightsbridge, Kensington, and the like”and you”ll see large swaths of residential addresses showing no signs of life at all. There’s no community: Net curtains hang untwitched, front doors stand bereft of gossip. You think of glamorous urban life as being like La Dolce Vita, but in much of central London it’s more like High Noon. Without Grace Kelly. Or Gary Cooper. It’s not that everyone’s tired of London; Dr. Johnson was right about that. Instead, London’s becoming a victim of its own success. Now hear me out. I”m not writing some xenophobic rant. I love how international this city is; it makes it far more exhilarating than any other city. It was acceptable in 1801, facing invasion by Napoleon, for Lord St. Vincent blithely to declare: “I do not say, my Lords, that the French will not come. I say only they will not come by sea.” But things have changed since then, and everyone is truly welcome. Even the French. Probably. Oh, all right then, venez et bienvenue!

The problem isn”t foreigners coming to live here; it’s people buying property and not coming to live here that make the place feel so soulless. You may say that in the general scheme of things this isn”t so great an issue; and besides, does it really matter that a few areas of prime real estate that have traditionally only been affordable for the rich are now only affordable for the super-rich? Well, at the moment perhaps not, although it’s not improving the quality of life for the rest of us. But further down the road, maybe.

The trouble with nonresident property owners is that they”re fair-weather friends. There are three main groups in London at the moment: the super-rich buying holiday homes, investors looking for a quick buck, and overseas nationals looking for a safe haven. Normally you don”t get those groups all at once. When there’s massive overseas investment, you don”t expect many financial refugees, and vice versa. In the past the global super-rich were few in number”relying broadly on having an oil field in the sandpit or a fleet of tankers on the pond”and they spread their charms more evenly around the world.

But that’s all changed. Why? Because of the attempts to fix their own burst financial bubble by our governments and central bankers (not bankers, please note, but central bankers: don”t blame piranhas for eating your arm when you put it into the water to tickle the fish). Bailing out the banks scot-free and then implementing quantitative easing, thereby keeping interest rates at all-time lows, has done very little to put cash in the average pocket and has nearly bankrupted savers. It has also let the financial-services sector continue largely unaffected, creating an ever wider disconnect between its salaries and those available in most other fields. At the same time the low cost of debt has created a liquidity bubble in the upper echelons of the corporate world. In most places, that wouldn”t ultimately matter. But in London, where the city represents a disproportionately large slice of the employment pie and where the international super-rich come to play when they”re not on the beach, it has created a yawning reality gap.