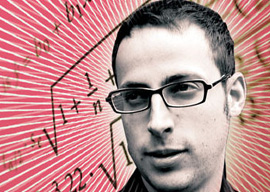 Nate Silver is most famous for steadily predicting Barack Obama’s reelection (which, as you may have heard, happened). Yet his new bestseller The Signal and the Noise: Why So Many Predictions Fail”But Some Don”t is a fine all-around introduction to the science and art of forecasting, with interesting examples drawn from many fields.

For example: You know those ten-day weather forecasts? Predicting the first week has gotten quite good, but the ninth and tenth days, Silver reports, are useless. They may even be negatively correlated with what actually transpires.

The Signal and the Noise starts weakly with the oft-told cautionary tale of how credit-rating agencies such as Moody’s and Standard & Poor’s missed the subprime mortgage bubble. Fortunately, it improves as the author turns to topics with which he has more personal experience such as sports, gambling, and sports gambling.

Indeed, The Signal and the Noise is one of the better Frequent Flyer books of recent years. Men don”t read books much anymore, but the one place you can find a fair number of guys with three-digit IQs and time on their hands is the airport. Hence, a relatively distinct genre has emerged in this century: nonfiction books that aren”t about business per se but imply they will familiarize you with conceptual techniques that could conceivably be applied to making money. Frequent Flyer classics include Malcolm Gladwell’s books; Freakonomics; Moneyball; and Thinking, Fast and Slow.

Silver’s entry into the Frequent Flyer genre shares many of the virtues of these books, such as a lucid and unobtrusive prose style. More impressively, Silver avoids their typical weakness: a lack of reality checking.

“The Signal and the Noise carries much advice, almost all of it good, about how not to get fooled when forecasting.”

Gladwell has finally become notorious for seldom knowing what he’s talking about, but overconfidence infects the genre’s worthier exponents as well. For example, U. of Chicago economist Steven D. Levitt became famous in 1999 for theorizing that legalizing abortion cut crime 20 years later. I pointed out to him in our debate in Slate that the murder rate among juveniles born just after Roe v. Wade was several times higher than for the cohort born just before legalization. This did not faze Levitt, who simply repeated his assertion six years later in Freakonomics…to vast acclaim.

A half-year later, though, two obscure economists tried to replicate Levitt’s original calculations, only to discover that their celebrity colleague had simply botched them. This fiasco didn”t seem to hurt Levitt’s career, but few people care much about getting the past right. Nor do people bother terribly about the long-term future: You can make reasonably accurate predictions by looking at, say, immigration-driven demographic change, but there’s little market for that.

What people do get excited over is who is going to win current competitions. If Silver had fouled up his call of this month’s election the way Levitt messed up his most famous theory, Silver’s career would have suffered. So by the standards of Frequent Flyer writers, Silver is admirably cautious and levelheaded. The Signal and the Noise carries much advice, almost all of it good, about how not to get fooled when forecasting.

Getting the 2012 election right wasn”t hugely difficult for Silver because 90 separate polling firms published their results from which he created a weighted average. (Although Republicans whined that he was weighting the polls wrong, Silver’s model underestimated Obama’s share in the national vote.)

More impressively, he beat the Intrade prediction market (which the federal government banned earlier this week), even though punters could (and some certainly did) use his projections. Plus, prediction markets can use inside information.